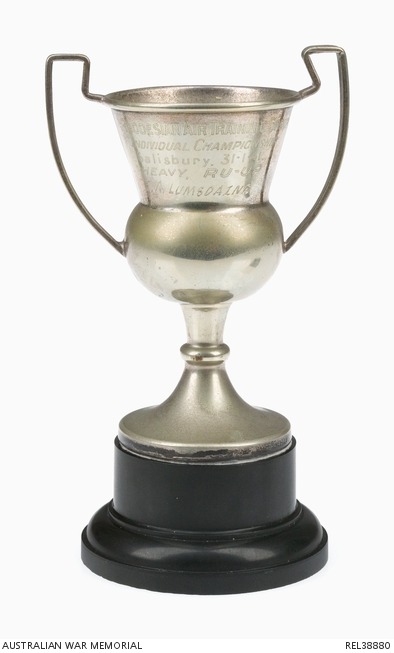 Rhodesian Training Group sports trophy engraved with recipient's details. The cup is sterling silver and has two curved handles attached. The handles are sterling silver and rise above the lip of the cup before flattening out and curling back down to join the lip of the cup. The stem of the cup is sterling silver and is joined to the base of the cup and the Bakelite base. Half way down the stem is a decorative raised ring. Underneath the ring, the stem tapers out to form the base of the cup. Joined to the cup's base is a round black Bakelite base in the shape of a round plinth. Inside the base it's size is recorded raised in bakelite numbers '2 1/4'. Engraved on the cup is 'RHODESIAN AIR TRAINING GROUP / INDIVIDUAL CHAMPIONSHIP / SALISBURY 31-1-41 / HEAVY, RU-UP / E.R. LUMSDAINE'.

Associated with the service of Ernest Roy Lumsdaine who was born 18 January 1918 in Bedfordshire, England, the son of 6812 Lance Corporal Russell Robberds Lumsdaine, of 1 Division Signal Company AIF, and Rose Victoria (nee Taylor), whom he had married during the war. Russell Lumsdaine left England for Australia, with his wife and son, on 12 July 1919 aboard the SS Indarra and settled on the outskirts of Sydney.

After completing his schooling, Ernest Lumsdaine worked in a brick factory and then as a wool presser in Bathurst, NSW. He enlisted in the RAAF on 19 August 1940 in Sydney, NSW. His initial training took place at Bradfield Park, NSW and after completing his basic aircrew training in early October, Lumsdaine embarked from Sydney in early November. He arrived in Durban, South Africa on 10 December 1940 and proceeded to Rhodesia where he trained as an observer. He successfully completed this course in February 1941 and was then posted to Queenstown, South Africa to train as a navigator. During the course, he was promoted to sergeant.

At the successful completion of his training in October 1941, Lumsdaine was sent to England where he was posted to 14 Operational Training Unit (OTU) which at the time was flying Hampden bombers. On 4 December Lumsdaine went Absent Without Leave. He was found the following evening at the Regent Palace Hotel in London. Upon being returned to his unit, Lumsdaine was reprimanded before returning to duty. On 8 March 1942, He was one of two crewmen who survived the crash of a Hampden bomber when the pilot crashed the plane during a night landing, killing himself and the rear gunner. Lumsdaine and the other survivor's lives were saved when a quick thinking farm labourer extinguished a fire that had started in one of the plane's engines. As the surviving crew had been trapped at the time, they would have perished had the fire taken hold. Having survived the crash with minor injuries, Lumsdaine soon returned to duty. On 23 December 1942 he was promoted warrant officer.

On 27 June 1943, Lumsdaine was briefly posted to 16 OTU for two days before being posted to 13 OTU where he became a navigator in Mosquitoes. On 6 December 1943, he was posted to 464 Squadron as a navigator. During a training flight at Chipping Warden aerodrome, on 6 January 1944, the Mosquito in which he was a navigator, undertook a low pass over the airfield. The pilot misjudged his pass and the aircraft came into contact with the ground before crashing into a nearby hangar, killing the pilot and Lumsdaine. Ernest Roy Lumsdaine was buried with full military honours on 12 January 1944 at the Oxford RAF cemetery in North Hinksey, Berkshire.