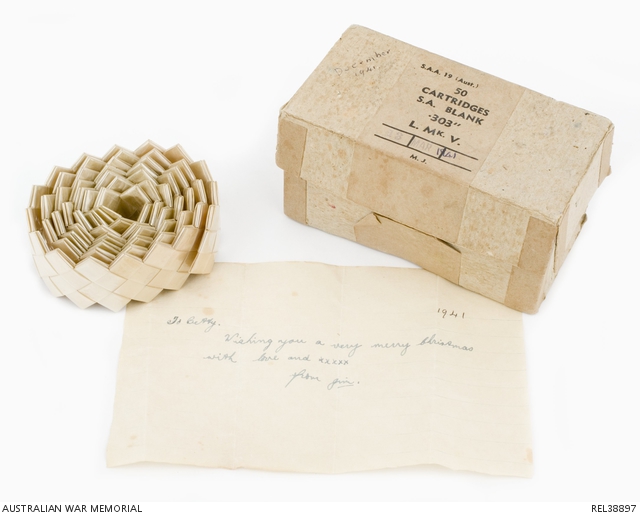 Belt woven from cellophane from cigarette packets, contained in a cardboard box. A note accompanies the belt which reads, 'To Betty, / Wishing you a very Merry Christmas / with love and xxxxx / from Jim'. The rectangular brown cardboard box with lid has a label with black text that reads 'S.A.A. 19 (Aust) / 50 / CARTRIDGES / S.A. BLANK / .303" / L.Mk. V.' Stamped below this in blue ink ' 13 MAR 1941 / M.J.' To the top right of the label is handwritten 'December 1941' in black ink.

NX104247 Corporal James Stewart served with the Citizen Military Forces for one year before enlisting in the Second AIF at Kolodong, NSW on 12 August 1942. He served with the 7 Australian Motor Regiment in Australia until July 1943, when he was transferred to 2/10 Australian Infantry Battalion. Stewart was promoted to corporal in 1945. After this promotion he was transferred to 2/16 Battalion but later returned to 2/10 Battalion.

Stewart had two postings overseas to New Guinea and Borneo. It was at New Guinea that he made this cellophane belt out of cigarette packets as a Christmas gift to his sister Elizabeth May Cameron. The belt came with a note from Corporal Stewart and reads 'To Betty, Wishing you a very merry Christmas, with love and xxxxx, from Jim' dated 1941. James Stewart was discharged on the 22 July 1946.