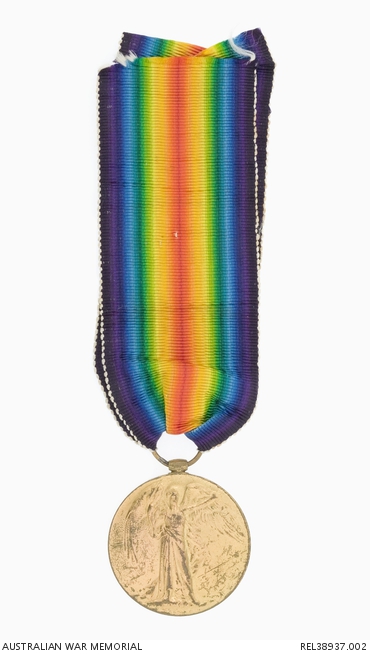 Victory Medal with recipient's details impressed around the edge.

Peter Henry Tierney was born in Camperdown, NSW in 1887. He worked as a driver before the outbreak of the First World War. He enlisted at Holsworthy on 10 September 1915 and began training as an infantryman. Embarking with 13 reinforcements for 3 Battalion on 20 December 1915, Tierney sailed in HMAT Aeneas arriving in Egypt in February 1916. He transferred to 2 Battalion on 14 February and sailed from Alexandria on 22 March. Tierney arrived with his Battalion in the port city of Marseille on 28 March and proceeded to Outersteen where the Battalion began familiarisation training. Tierney went into action in April 1916 when 2 Battalion moved into the trenches in the River Laies sector. He spent several weeks in the trenches before the Battalion was relieved, moving back through Fleurbaix to Sailly. After another period of duty in the trenches near Fleurbaix, Tierney moved with 2 Battalion in early July from Fleurbaix to Warloy arriving in mid July. It was at this time Tierney contracted a severe case of influenza and was evacuated to England for treatment. In September, Tierney was charged for being absent without leave for 20 hours. He was fined two days pay and confined to barracks for seven days. He returned to France on 16 October and was transferred to 30 Battalion which moved into the line several days later at Trones Wood. When the Battalion was relieved from the trenches at the end of November, He was evacuated to hospital suffering from frost bite to his hands and feet. He was also suffering the effects of trench foot. In January 1917, he was transferred to England, his condition becoming critical. Unfortunately, frost bite combined with the effects of trench feet forced surgeons at the Middlesex hospital to amputate both of Tierney's legs halfway up his calves. His hands were saved, but it was some time before he gained their full functionality. In the months after the surgery, Tierney was severely ill and his next of kin were warned of his decline, but he managed to overcome his illness and the physical trauma of losing his legs. Between March and July 1917, he was moved to several different military hospitals as his condition improved. In mid July, he embarked in HMAT Kanowna arriving home in Australia in September. He was discharged from the AIF in October 1917 as medically unfit.