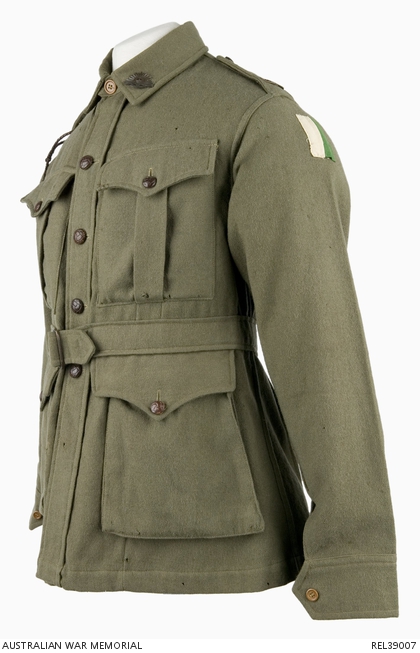 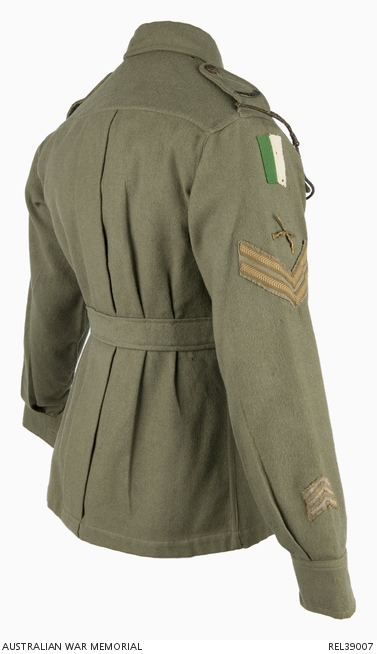 Other ranks' pattern khaki/green wool twill service dress tunic with a stand and fall collar fastened by a single brown celluloid button. The shoulder straps are secured to the tunic with a small pressed leather button and bear oxidised brass curved AUSTRALIA titles. Oxidised brass Rising Sun collar badges are held in place on the collar with split pins. There is a pleated patch pocket on each breast, with pointed flaps secured by a single button. A plaited brown leather lanyard is attached over the right shoulder strap and holds a nickel plated brass Acme City whistle, which is carried in the right breast pocket.

Below the waist is a pair of larger expanding patch pockets, which also have pointed button flaps. The integral self fabric belt at the waist is finished with a brass buckle. A central back pleat extends from the centre back yoke to the hem. The straight cuffs are fastened by a single button, and the sleeves each have a vertically aligned rectangular white/green wool flannel colour patch for 56 Battalion, AIF, sewn on below the shoulder. There are woven cotton corporal's rank chevrons on the upper right sleeve; above them are crossed brass rifles for marksmanship. Three blue service chevrons are sewn above the right cuff.

All buttons on the jacket are of pressed leather and are secured to the tunic by split rings. There is an internal field dressing pocket fitted inside the right skirt of the tunic. A black printed cotton manufacturer's label is sewn inside the yoke and reads 'DOWN & MUTIMER SIZE 22'.

William Dickinson Reily was born at Batlow, New South Wales in 1868. Most of his working life had been spent as a miner at Adelong, NSW, before he enlisted in the AIF at the Goulburn Depot Camp on 9 June 1916, stating his age to be 41 rather than his true age of 47.

Reily was assigned as a private to C Company, Depot Battalion, and remained at Goulburn until 21 September, when he transferred to the Liverpool Training Camp near Sydney. Before his move to Sydney he appears to have been one of several groups of miners (experienced in mining, timbering, shoring, drilling and blasting), who were sent to the Royal Military College Duntroon, in Canberra, to assist in the instruction of officer cadets in mining and trench warfare, as the college did not have experienced instructors in this field at the time. He received a written reference relating to this work from Major E L W Brownell form the Trench Warfare and Bombing School at Duntroon in August 1917, and may have spent more time there in late 1916 and early 1917.

At Liverpool, NSW, Reily was nominally attached to both B and E Companies of 55 Battalion, but remained in Australia, possibly because his expertise was required at Duntroon. His original attestation papers having been lost, Reily re-enlisted in the AIF at Liverpool on 10 July 1917. He was allocated the service number 3695 and posted to the 10th reinforcements for 56 Battalion. Reilly left Australia for overseas service on 31 October, aboard the transport HMAT A14 Euripides. On arrival in England at the end of December his true age was revealed and he was posted to the 14th Training Battalion at Hurdcott in Wiltshire, rather than joining his battalion in France.

When the Battalion moved to nearby Codford in 1918, Reily accompanied it and was appointed acting lance corporal. The marksmanship badge on his uniform suggests that he may have been a musketry instructor at one time. He left England to return to Australia on 16 January 1919.