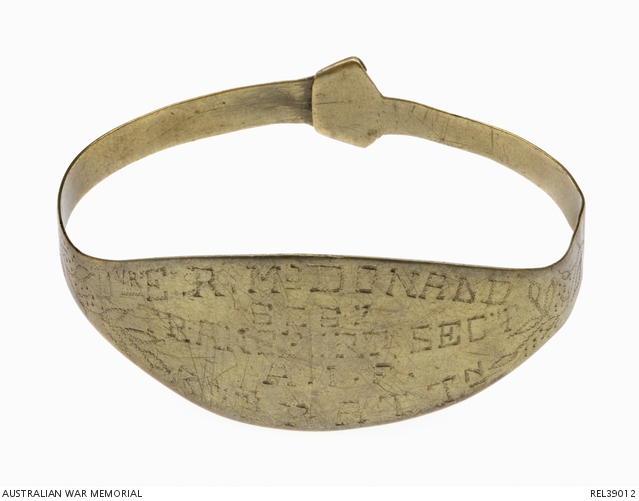 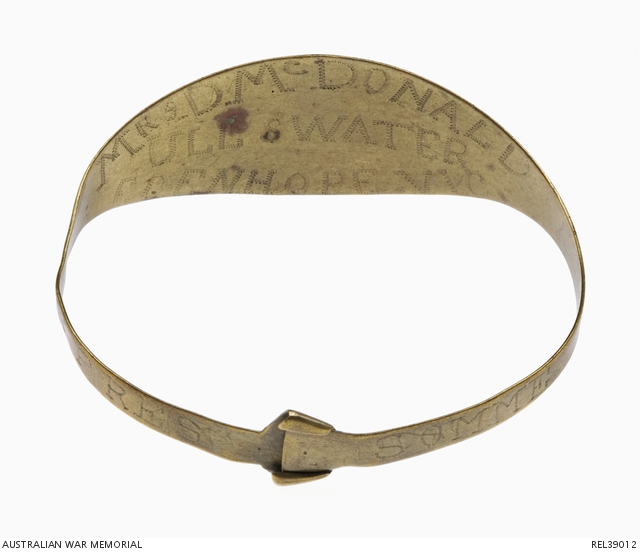 Associated with the service of 6062 Driver Ewen Ross McDonald who was born in 1893 in Edenhope, Victoria. He was a farm labourer working in the Horsham district when the First World War began. He enlisted on 15 March 1916 in Horsham where he undertook the medical examination and was passed fit. He reported to the Bendigo depot on 26 June 1916 where he undertook his basic training as part of the 19th reinforcements to the 6th Battalion. He was moved to Broadmeadows camp in early June where training continued into July. McDonald embarked from Melbourne in HMAT Themistocles on 28 July arriving in England on 11 September. He spent the next two months in further training in England before being transferred to the 38th Battalion. On 22 November, he proceeded to France with the 38th Battalion. He entered the front line for the first time on 1 December when the battalion relieved New Zealand troops in the Houplines area. Over the next two months the battalion spent time in the trenches in the Houplines and Bois Grenier areas. In April, McDonald moved with the battalion into Belgium seeing further action in the Ploegsteert Wood area. On 28 May 1917, the battalion undertook a major trench raid. The raid went well and a prisoner was captured, but the withdrawal turned into a disaster. McDonald was shot in the neck and wounded and nearly half of the raiders were killed or wounded by an Australian artillery barrage landing in the midst of the withdrawing raiders. McDonald was evacuated and sent to the 55 General Hospital in Boulogne. In Early June he was transferred to a convalescent depot before returning to the battalion in mid July. On 18 July, McDonald transferred to the 39th Battalion. He was appointed as a driver in the battalion's transport section to replace a driver who had been taken to hospital wounded. At the end of July, he contracted influenza and spent the next month in hospital. McDonald returned to the battalion at the end of August and took part in the offensive which became known as 'Third Ypres'. He took part in the battles of Broodseinde Ridge and Passchendaele. 0n 9 February 1918, he was granted 3 weeks leave in England returning to the battalion in early March. In April 1918, McDonald moved with the battalion to Amiens to stop the German advance after they had broken through allied lines. At the end of July, McDonald was sent to hospital with trench fever. He returned to the Battalion in early September before a recurrence of the illness saw him return to hospital. He rejoined the battalion in reserve at Hargicourt on 8 November 1918 and it was here on 11 November that McDonald's war came to an end. He embarked from England on 27 May 1919 and arrived in Melbourne on 18 July. McDonald was discharged from the AIF on 4 September 1919.