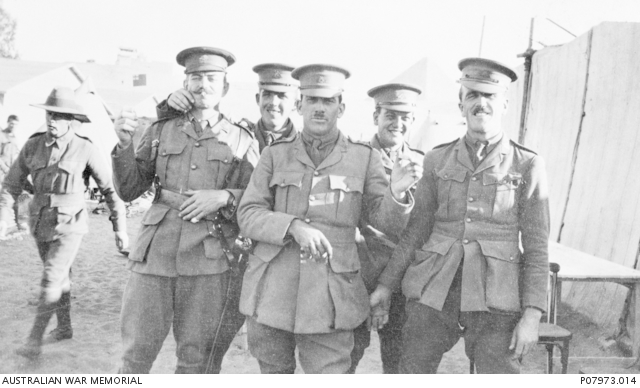 Informal group portrait of, left to right; Major Blair Inskip Swannell; Lieutenant (Lt) P Howell-Price; Lt George Frederick Wootten; Lt Arthur Champion and Lt Alexander Kenneth MacKenzie celebrating Christmas in the afternoon at Mena Camp. Major Swannell was killed in action at the Gallipoli landings on 25 April 1915. Lt Price (later Major Howell-Price DSO MC) was mentioned in despatches for his involvement in the Lone Pine battles. He also served at Armentieres in France in June 1916, for which he received the DSO, the Somme in July 1916, Flers in November and at Bullecourt in March 1917. He was awarded the Military Cross and later died at Broodseinde in Belgium on 4 October 1917, aged 23. Lt Wootten (later Major General Sir George Frederick Wootten KBE, CB, DSO & Bar, ED) went onto serve a distinguished career with the Australian armed forces in both the First and Second World Wars, retiring in 1958. Lt (later Lt Col) Alexander Kenneth MacKenzie was awarded the MC for his actions at Bullecourt in May 1917, and the DSO in September 1918. He returned to Australia in 1919 and died in 1925.