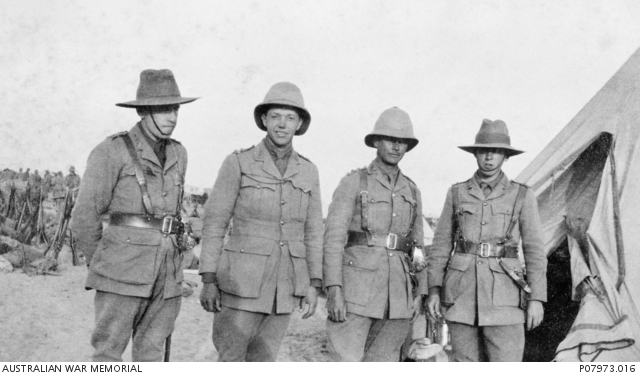 Informal outdoor portrait of four 1st Battalion officers. Identified left to right; Lieutenant (Lt) Royston Kennilworth Sydney May; Lt Herbert Gordon Carter; Captain Albert John Joseph George McGuire and Lt Philip Llewellyn Howell-Price. Lt May suffered gunshot wounds at Gallipoli on 25 April 1915. He was evacuated to the No. 1 General Hospital in Heliopolis where he died on 16 May 1915, aged 20. Lt Carter (later Lieutenant Colonel Carter) was awarded the Distinguished Service Order (DSO) in 1917 and returned to Australia in 1919. Captain McGuire was wounded in action at Gallipoli on 25 April 1915 and was evacuated to the Bombay Presidency Hospital in Alexandria where he died of his wounds on 7 May 1915, aged 23. Lt Price (later Major Howell-Price DSO MC) was mentioned in despatches for his involvement in the Lone Pine battles. He also served at Armentieres in France in June 1916, for which he received the DSO, the Somme in July 1916, Flers in November and at Bullecourt in March 1917. He was awarded the Military Cross and later died at Broodseinde in Belgium on 4 October 1917, aged 23.