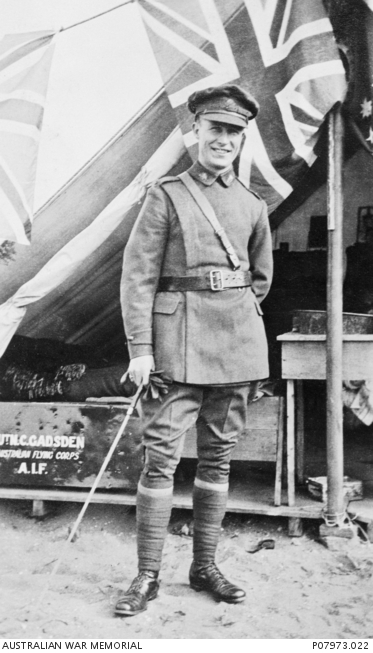 Outdoor portrait of Lieutenant (Lt) Norman Cottam Gadsden (right) on the day of Lt Gadsden's wedding to Dorothy Violet Smith. A jute importer from Canterbury, Victoria prior to enlistment, Gadsden enlisted with the Australian Flying Corps on 21 November 1916. He married Dorothy in July 1917, days prior to his embarkation from Melbourne aboard HMAT Themistocles (A32) on 4 August. Following training in England he was appointed Flying Officer on 28 May 1918, and Lieutenant in 1918. After the war, he was joined in England in 1919 by his wife, and was permitted a special discharge "to enable him to proceed to Australia via America (in which latter country he desires to obtain information regarding the Cotton Bag Industry)". Returning to Australia, Gadsden resumed his career with the family company, J Gadsden Pty Ltd. On the verso of the card is written "the happy bridesgroom".