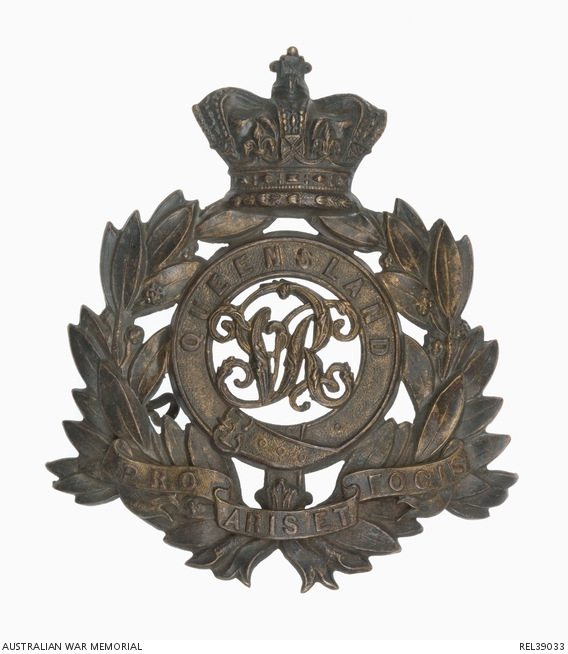 A voided bi-metal helmet plate with a laurel wreath surmounted by a Victorian crown. At the centre of the wreath is the cypher 'VR' surrounded by a garter containing the word 'QUEENSLAND'. A separate part banner below this has the motto 'PRO ARIS ET FOCIS'. On the reverse are two attachment lugs.

Queensland was established by Letters Patent from Queen Victoria, on 6 June 1859. Prior to this time, the area that constitutes Queensland was formally part of the colony of New South Wales, and therefore came under New South Wales' military protection. After being granted self government, Queensland immediately set about raising militia forces. By March, 1860, a troop of volunteer mounted rifles had been raised. They were soon joined by units of infantry and cavalry, and later supplemented by artillery. These men were all volunteers, but unlike the other Australian colonies of the time, they received government subsidies and grants for the purchase of equipment and ammunition. This was soon broadened to include grants of fifty acres of land upon completion of five years of consecutive service. By 1876, the forces amounted to an inadequate 412 men in total. Steps were taken to improve the situation, including the passing of the Volunteer Act (1878), which encouraged citizens to undertake training, and saw the numbers of men increase to 1219 by 1880. Like the other Australian colonies, Queensland's government was not satisfied by the volunteer system, and aimed to replace it. A Military Committee of Inquiry was established to determine the best alternatives, and found that the service lacked cohesion and discipline. They recommended a combination of partially paid militia with volunteer corps formed to support them, with all male inhabitants liable for service. In 1884, the recommendations of the Military Committee of Inquiry were enacted, and a smaller, more cohesive permanent force was established, with volunteer support. Upon the outbreak of the Boer War in 1899, Queensland immediately responded by dispatching a contingent of 149 officers, and 2739 men of other ranks, comprising the Queensland Mounted Infantry, and Queensland Bushmen. As with all of the Australian colonies, the forces of Queensland automatically transferred to Commonwealth control with the enactment of Australian federation on 1 January 1901.