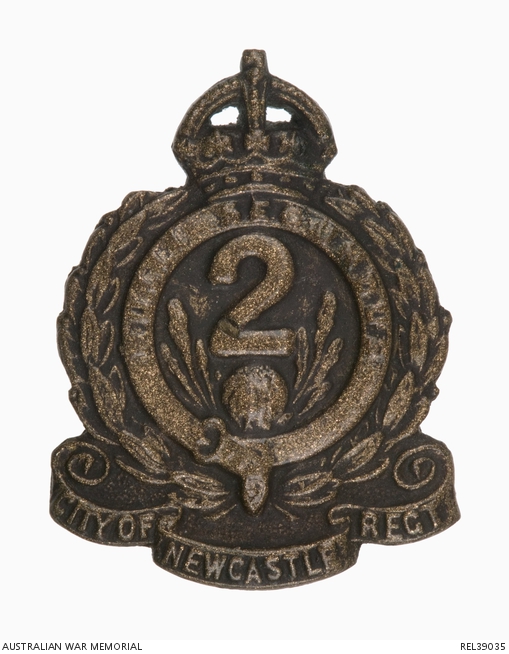 A garter inscribed ' NULLI SECUNDUS', surmounted with a King's crown. Within the garter, a warratah flower and leaves topped with the numeral '2'. Around the garter a laurel wreath and at the base a scroll inscribed ' CITY OF NEWCASTLE REGT'.

On returning to Australia after the First World War the Australian Imperial Force, including the 2nd Infantry Battalion, ceased to exist. In its place was formed The Citizens Military Force (CMF), also known as the militia. These new units maintained the structure of the AIF and kept the same numerical designations. The militia units were also distributed in the same areas the original AIF units were raised. Consequently, militia units were known by the name of their shire. Thus the 2nd Infantry Battalion became the 'City of Newcastle Regiment'. This unit became affiliated with the Queen's Royal Regiment, West Surreys and the Canadian Queen's Rangers and the 1st American Regiment. During the Second World War, the 2nd Battalion was responsible for manning the Fort Scratchley Battery in Newcastle. These men saw action in the early morning hours of 8 June 1942 following the Japanese raid on Sydney Harbour. Japanese submarines carried out brief bombardments of the coastal suburbs of Sydney and of Newcastle.