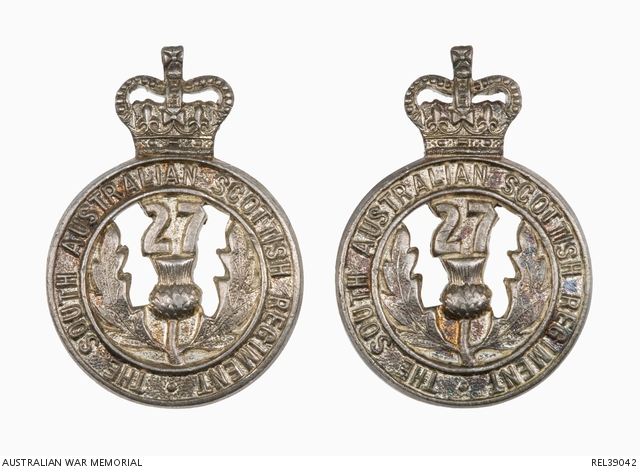 Pair of 27th Infantry Battalion (The South Australian Scottish Regiment) collar badges. A thistle is centrally located within the badge above which is the number '27'. Outside of this, in a circular frame are the words, 'THE SOUTH AUSTRALIAN SCOTTISH REGIMENT' surmounted by a Queen's crown. There are two lugs on the reverse of the badge.

The 27 Battalion (South Australian Scottish Regiment) was raised on 1 July 1948 as part of the post war Citizens Military Force (CMF). The Battalion Headquarters was located at Port Pirie and training centres were established at Kadina, Clare, Balaklava, Burra, Snowtown, Murray Bridge and Beulah Park. In March 1949 the first post war camp was held at Woodside with approximately 100 members attending. In 1950 the Battalion Headquarters was re - established at Torrens Training Depot together with a support company and headquarter company. In 1952 universal military training was introduced, which required trainees to undergo three years training on a part-time basis with CMF units after serving three months in continuous training. The Battalion was re-organised at this time to include additional training centres which had previously been territory of the 3/9 South Australian Mounted Rifles namely Mount Gambier, Millicent, Naracoorte and Bordertown. The Battalion had become so large by 1953 that a fifth rifle company (E Company) was raised. The unit returned to the normal establishment in 1954, following the reforming of 43/48 Battalion. The Battalion Headquarters moved to Southwark Training Depot in 1956. On 1 July 1960 all South Australian CMF Battalions including the 27th Infantry Battalion (The South Australian Scottish Regiment) were amalgamated into the Royal South Australia Regiment.