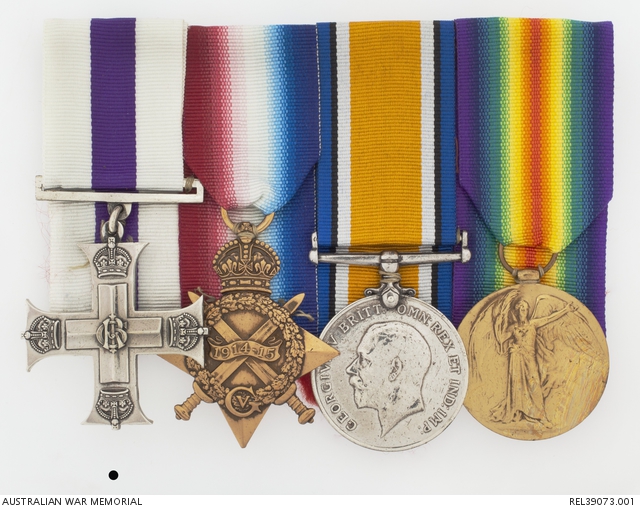 Harold Burke, from Melbourne, enlisted in the AIF at the age of 21 in August 1914. In October 1914, Burke embarked for active service overseas with 5 Battalion. After a period of training in Egypt he embarked to take part in the Gallipoli Campaign. He landed with his battalion on 25 April 1915 as part of the second wave. While at Gallipoli, Burke was promoted through the ranks; firstly to corporal in June, sergeant in August, then 2nd lieutenant in September. After the withdrawal from Gallipoli and return to Egypt, Burke sailed for France and the Western Front in March 1916 with 5 Battalion. It was at this time that he was promoted to lieutenant ,and in August was promoted to captain. In September 1917, Burke was awarded the Military Cross. His citation reads: 'During the operations east of YPRES on 20th September 1917 Captain BURKE was in charge of the right support Company. Under heavy shelling, in the absence of the leading Company Commander who had been wounded, this officer, regardless of personal danger, reorganised the right flank of the Battalion. At a critical moment he reorganised men of another Battalion who were in rear and sent them forward to their objective and established a Strong Point in a sound tactical position under heavy fire, At all times he displayed sound judgment and good leadership.' Captain Burke was killed in action on 24 August 1918 at St Martins Wood near Proyart in France, a few weeks prior to 5 Battalion's disengagement from operations. He is buried at Cerisy-Gailly Military Cemetery in France.