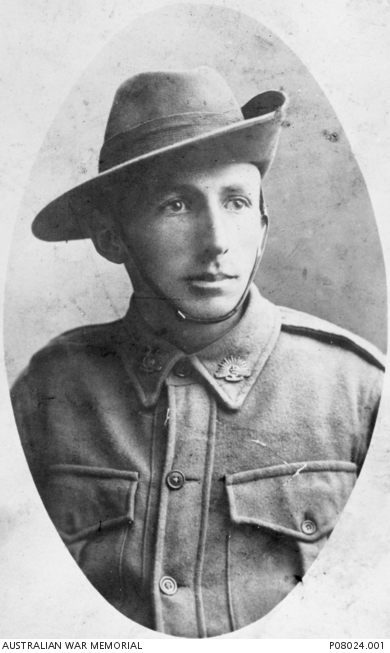 Studio portrait of 545 Private (Pte) Gilbert Glenloth Wilson, 21st Battalion, of Port Melbourne, Vic. An engine cleaner for the Victorian Railways prior to enlistment, Pte Wilson embarked on board HMAT Ulysses (A38) on 10 May 1915. He served at Gallipoli from August 1915 until December 1915. Pte Wilson was transferred to the 2nd Pioneer Battalion and arrived in France in March 1916 being appointed Lance Corporal and then Acting Corporal in August 1916. Corporal Wilson was killed in action at Flers, France on 14 November 1916. He was 24 years of age. Corporal Wilson's brother Lieutenant Frederick Gladstone Wilson, aged 19, was killed in action at Gallipoli on 26 April 1915.