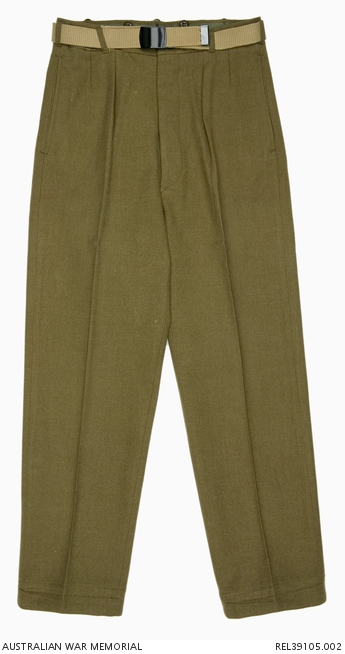 Pair of khaki wool serge Australian Army battledress trousers and belt. The trousers are double pleated, with narrow waistband, slash pockets at the front and a buttoned patch pocket at the rear. Fitted with a four-button fly and three buttons at the rear for attaching to the battledress blouse. The waistband and fork are reinforced with khaki cotton drill. The pockets are lined with green nylon. There are three pairs of buttons fitted around the inside of the waistband for attaching braces. All buttons are brown plastic. A a small repair patch and maker's cloth label is sewn to the inside, detailing the maker's name and date of manufacture, plus the following detail, 'broad arrow CLASS 8405-66-025-6187 SIZE AND WAIST 30S MATCHING JACKET 35/36S NAME ARMY NO.' The belt is khaki cotton web with a black metal auto-lock buckle and tip.

Associated with Private D Dawson, 5 Royal Australian Regiment (RAR). Born on 23 January 1949 at Glen Innes, NSW, Douglas Dawson was working with the Commercial Bank of Australia when he was conscripted into the Australian Army in October 1969. Dawson undertook recruit training at Kapooka, NSW and Infantry Corps training at Singleton, NSW. In early 1970, Private Dawson joined 5 RAR, which had just returned from its second tour of duty in South Vietnam, at Holsworthy, NSW and served in Battalion Headquarters (BHQ). He was promoted to lance corporal and was discharged in September 1971.