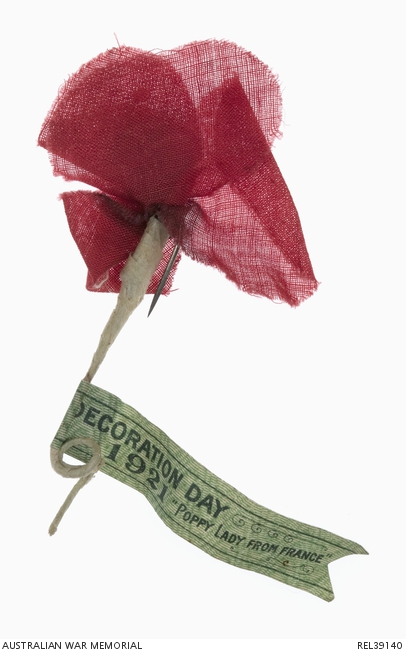 Although the tag says ‘Decoration Day’ this artificial poppy was made for sale in Australia on Remembrance Day 1921. In the United States of America Decoration Day was established in the years following the Civil War and was designed to honour those who had died in that conflict by decorating their graves with flowers. The day gradually became known as Memorial Day and is now observed on the last Monday in May.

The 'Poppy Lady From France' was Madame Anna E Guerin. Guerin was the founder of the American and French Children’s League through which she organized French women, children and war veterans to make artificial poppies out of cloth. Her intention was that these poppies would be sold and the proceeds could be used to help fund the restoration of the war-torn regions of France.

The Australian Returned Soldiers and Sailors Imperial League (the forerunner to the RSL) first sold poppies for Armistice Day in 1921. For this drive, the league imported one million silk poppies, made in conjunction with the American and French Children’s League. Each poppy was sold for a shilling: five pence was donated to a charity for French children, six pence went to the League's own welfare work, and one penny went to the League's national coffers. This is an example of the first issue of this style of poppy.