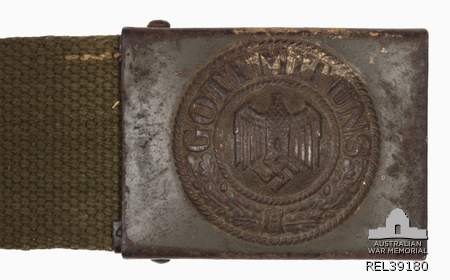 German Afrika Corps belt with Other Ranks buckle. The belt is olive coloured cotton webbing. The belt buckle still has the original olive green paint used to cover the metal. The paint has worn away from the design on the buckle and the edges. The circular design on the buckle contains the words 'GOTT MIT UNS' [God with us] and a wreath. Inside the inner circle is the German eagle over a swastika. The belt is joined by a tongue and loop. The loop is located on the underside of the buckle. The tongue is attached to the opposite end of the belt. There is a double claw on the underside of the buckle attached by cotton webbing. This is designed to attach to the main belt and adjust to fit the wearer. The belt appears to be incomplete. There is no tape on the reverse of the belt to attach the double claw to. Instead, the owner has punched holes into the belt to keep the buckle attached.

Associated with the service of N202305 Douglas William Fuller. Fuller was born in Adelong, NSW on 3 November 1904. After completing school, he became a mechanic, eventually running his own business in Adelong. He enlisted for service in the Second World War on 4 April 1942. He was nominated for a home defence unit but his records indicate that he was not called up for duty. It is unclear how he came into possession of the Afrika Corps belt.