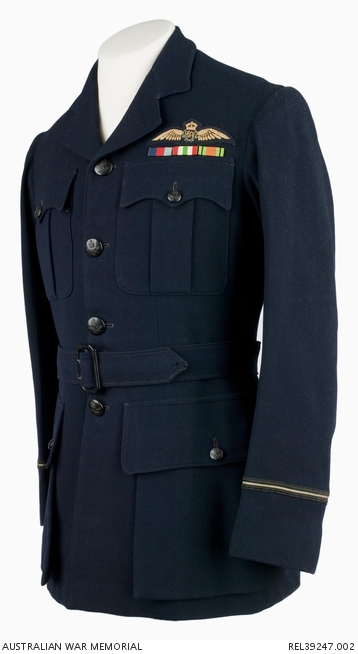 RAAF blue officer's winter service dress tunic. The tunic has two box pleated breast patch pockets secured with three point flaps and plastic RAAF buttons. The tunic also has two expanding waist pockets secured with square flaps and plastic RAAF buttons. There is also a pocket let into the waist of the jacket below the right breast pocket. Above the left breast pocket are service ribbons for the 1939-45 Star, Italy Star and the Defence Medal. A pair of embroidered RAAF pilot's wings are sewn above the service ribbons. The rank insignia for a flying officer is sewn to the lower section of each sleeve. The tunic is fastened by four plastic RAAF buttons and is belted at the waist. The waist belt is sewn to the rear of the tunic and is secured at the front by a double clawed plastic buckle. The tongue of the belt has three sets of holes which have been reinforced with stitching around the edges. Under the end of the tongue is a small press stud that clips to the other side of the belt when done up.

Associated with the service of 420490 Flying Officer George Geoffrey Richard, RAAF. Richard was born on 12 October 1921 in Burwood, NSW. After leaving school in year 9 he worked in the family business, spending two years on the factory floor and one year as a draftsman.

Richard enlisted in the RAAF on 8 November 1941, not long after his 20th Birthday. He was assigned the service number 420490 and the initial rank of aircraftman class 2. He was posted to 2 Initial Training School, Bradfield Park where he underwent basic training. He passed his course and qualified for flight training on 29 April 1942 and was promoted to leading aircraftman. Richard's next posting was to 10 Elementary Flying Training School at Temora, NSW where he learned to fly Tiger Moth aircraft.

Richard was then sent to Canada for further training. He embarked from Melbourne on 29 July, disembarking in Canada on 19 August. He was posted to 4 Service Flying Training School where he learned to fly Cessna Crane aircraft. The winter weather made flying difficult, but Richard enjoyed the challenge. He celebrated his 21st birthday during this time and celebrated with a group of fellow trainees. He completed his pilot training on 26 December and was promoted to temporary sergeant pilot on 30 December.

Richard left Canada on 25 January 1943, arriving in England on 5 February. He was posted to 15 Advanced Flying Unit flying Airspeed Oxford and Avro Anson aircraft. 21 Operational Training Unit (OTU) was his next posting, where he converted to flying Vickers Wellington III bombers. During this period, Richard was promoted to temporary flight sergeant.

He finished his conversion course and was seconded to the RAF. He was commissioned as a pilot officer and sent to 40 Squadron in April 1944. He arrived in Egypt in May and over the next four months flew 40 operations in Vickers Wellington X aircraft from bases in Egypt and Italy. On 1 September, Richard was posted to Shallufa, Egypt where he underwent a flying instructor's course. He was then posted to 77 Operational Training Unit where he instructed crews in night bombing operations.

Richard was promoted to flying officer on 16 October. He remained with 77 OTU until 20 February 1945. Operational and training flights had been wound up in the region at this time, and Richard remained in Egypt for several more months until he could obtain passage home to Australia. He returned to Australia in October and was discharged on 4 November 1945.