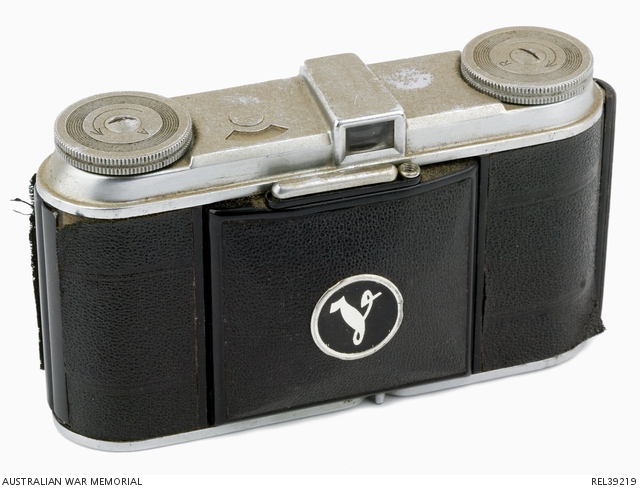 Rectangular silver and black camera with folding bellows. It is fitted with the Vigtlander Skopar f/3.5 50mm lens and a Prontor II shutter. There is a lever to tension the shutter and a separate winding knob located at the top of the camera. The shutter release bar is fitted to the top of the camera's front panel. A direct vision viewfinder is built into the top plate with a front counter to the right side. The camera's wind-on mechanism permits the double-exposure interlock to be disengaged, allowing a partially-used film to be reloaded without exposing every frame. The film transport uses a serrated feeler spindle instead of a sprocket used in later cameras.

VX3009 Corporal Alan Richard Hoskin was born on the 27 October 1914 in Ballarat and enlisted for service in the Special Force at East Melbourne on the 4 December 1939. His previous occupation was a fitter turner (Armourer). He was appointed acting corporal with the 2/1 Field Regiment Workshop and embarked for the Middle East. His rank was confirmed on the 2 February 1940. On 14 April 1940 he was detached for duty with 2/2 Field Regiment and saw action in the Middle East, Greece, Crete (Operation Mercury). While in Crete he souvenired this camera from a deceased German soldier. According to his family, Hoskin and a friend had agreed to wait to be evacuated from Crete on the last boat. They were told that it would not be till the next morning and that they could wait further, or head for the hills. Hoskin stayed because he believed that their commanding officer had done much to save them up to that point, and he felt he owed him some respect. His friend decided to leave and was later killed. Hoskin arrived back in Australia on the 7 July 1942 and was transferred to 2 Australian Infantry Troops Workshop. He embarked for New Guinea on 14 August 1943 and returned to Australia 30 March 1944. Hoskin was discharged on the 7 November 1945.