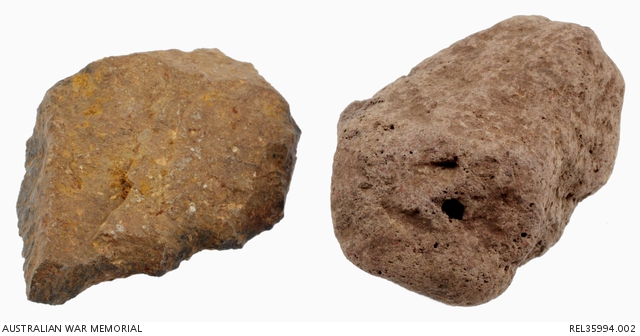 These pieces of rock were retrieved from the Viet Cong tunnel system which Australian engineers penetrated during Operation Crimp from 8 to 14 January 1966. The objective of the operation was a series of underground bunkers believed to be in the Ho Bo Woods area of Cu Chi district in Binh Duong Province. Intelligence indicated that the bunkers housed the headquarters for the Communist committee that controlled all Viet Cong activity in the Capital Military District. Over 8000 troops took part in the operation, including a number of Australian units attached to the US 173rd Airborne Brigade.

A large complex of tunnels was subsequently uncovered by 1 Battalion Royal Australian Regiment, which was later discovered to cover approximately 56 square kilometres. It consisted of over 200 kilometres of tunnels in multiple levels, and included living, working and storage areas. Policy at the time was to destroy tunnels and bunkers, but the engineers of 3 Field Troop began searching them and captured large quantities of weapons, food, equipment and documents. Following these successes, American units throughout Vietnam received orders to clear tunnels before destroying them.