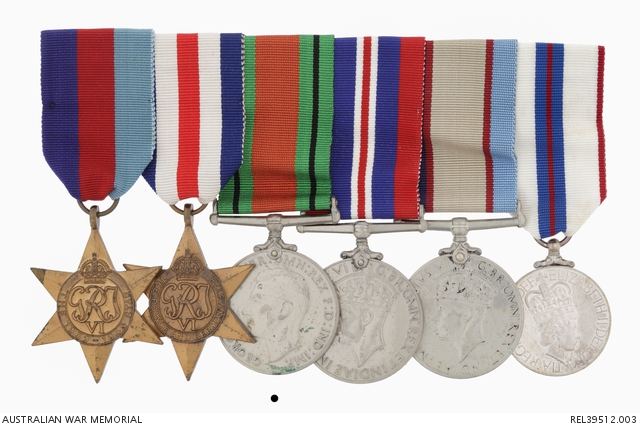 Flying Officer Roy Frederick Turner was born at Surry Hills, New South Wales in 1922. He worked as a dry cleaner before enlisting in the RAAF on 23 May 1942. After initial training in Australia, which saw him promoted to Leading Aircraftman and then Flight Sergeant, he embarked at Melbourne on 6 March 1943, arriving in England the following month. Turner undertook further training in Ireland and was posted to 517 Squadron RAF in February 1944, and then to 298 Squadron in the same month.

In March 1944 Turner commenced training in airborne operations, and was subsequently posted to 570 Squadron in July 1944. September 1944 saw the ill-fated Operation Market Garden in the Netherlands and Germany. 570 Squadron was engaged in glider towing and supply drops during this operation.

Turner remained with 570 Squadron for the rest of the war. He was promoted to Pilot Officer in December 1944 and to Flying Officer in June 1945.
On 18 September 1945 he embarked at Liverpool for the journey home, arriving at Sydney on 19 October 1945. Turner proceeded on two months leave, eventually leaving the Air Force on 10 December 1945.

After the war Turner was awarded a scholarship to study law at the University of Sydney. Upon completing his studies he worked as a solicitor, eventually establishing the firm of Turner, Freeman and Partners. He undertook legal work for many sections of the trade union movement and was highly active in Aboriginal affairs. In 1976 Turner was elected as a Labor member to the New South Wales Legislative Council, and served in this position until 1984. In 1986 he was made a Member of the Order of Australia for service to the community. Roy Turner died in 2004.