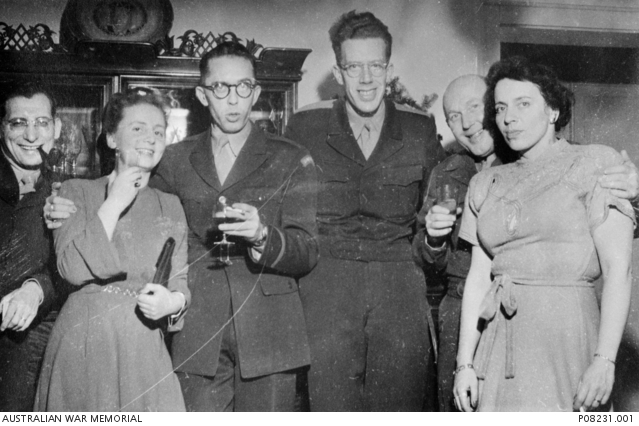 Informal group portrait of Cornelius de Bakker (third from left), and unidentified members of the United Nations Relief and Rehabilitation Association (UNRRA), probably in Germany. Cornelius de Bakker was born in the Netherlands in 1910 and served with the Dutch Underground Movement in active resistance against the German forces during the Second World War. Wanted by the Gestapo, de Bakker helped to store and distribute weapons and ammunition needed by the resistance movement and sabotaged efforts by the Germans to transport Dutch citizens into forced labour camps. Assisted by his wife, de Bakker also hid refugees, downed Allied airmen and Jewish families. The latter resulted in the de Bakkers permanently adopting two children, orphaned by the war. In 1944 de Bakker joined the UNRRA, an agency set up in 1943 to help rehabilitate the many thousands of people displaced by the war and to provide relief to areas liberated from Axis powers. Although the United Nations was not founded until 1945, the term 'United Nations' had been in use since 1942 to refer to the Allied countries of the Second World War. De Bakker worked in conjunction with the United States Army rendering aid to the displaced. In 1951 de Bakker immigrated to Australia. He was presented with the Resistance Commemorative Cross on 1 July 1982 by the Netherlands Consul 'for service to the Kingdom of The Netherlands in the resistance of the Peoples of The Netherlands against the occupying forces during World War II'. The Resistance Commemorative Cross and items of Cornelius de Bakker's uniform are held in the National Collection of the Australian War Memorial.