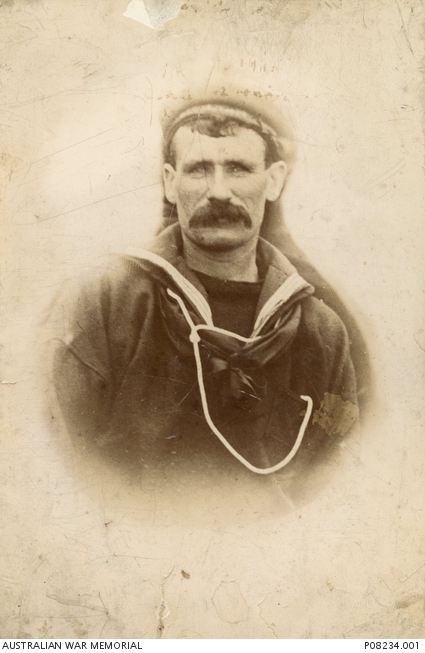 Studio portrait of 150 Able Seaman (AB) Duncan McPherson, Victorian Naval Contingent, of Geelong, Vic. AB McPherson embarked on SS Salamis on 30 July 1900 to serve with the contingent in the Boxer Uprising in China. He returned to Australia in 25 April 1901 on board SS Chingtu. He later worked as a labourer and stevedore at Port Melbourne, Vic, before enlisting as a Private (Pte) in the First World War. According to family stories, when he enlisted he put his age down from 55 to 42, dyed his hair with boot polish, and named the fourth of his seven children as his eldest. 4565 Pte McPherson embarked with the 14th Reinforcements, 13th Battalion, from Sydney on HMAT Ballarat on 16 December 1915. Pte McPherson transferred to the 54th Battalion. He was later killed in action at Fromelles, France, on 19 July 1916. His actual age at the time of his death was 56 years. He has no known grave and is commemorated on the VC Corner Australian Cemetery Memorial, Fromelles.