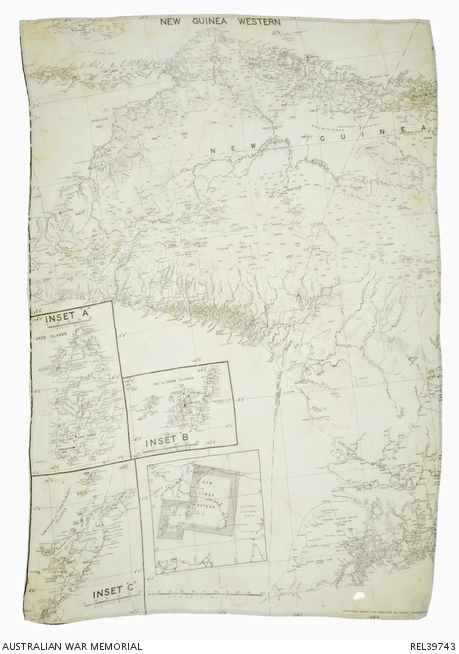 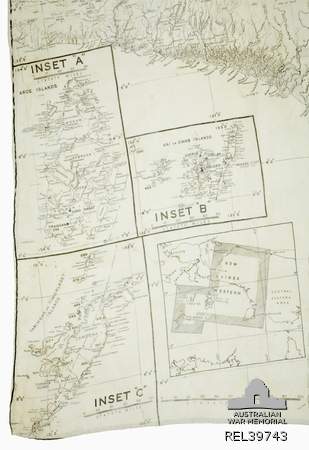 Rectangular pale green silk map in portrait format, showing the west coast of New Guinea with rivers, towns, trig points and latitude and longtitude marked. The mainland is depicted between longtitudes degrees 135 and 140 and latitudes 1 south to 8 south. Four insets are included at the lower left of the map - one shows how the map sits in relation to the remainder of New Guinea; the remaining three show Aroe Islands (Inset A), Kai or Ewab Islands (Inset B) and Tanimbar or Timorlaoet Islands (Inset C). The words 'Prepared under the direction of RAAF Headquarters' appear along the right base. A hem has been added to the top, bottom and proper right side at a later point.

Map related to the service of 67472 Corporal James Logan Graham of Lakemba, NSW. Graham enlisted on 15 July 1942 and was mustered as a Driver. He attended 2 Bomb and Gunnery School at Port Pirie from 9 August to 4 January 1943 where he was assigned to the Transport section (where, according to an interview with his grand-daughter, 'accommodation was in our respective trucks and vehicles'). Training for the airmen of the Bomb Aimer School included time in the obsolete Fairey Battle dive bomber. There were a number of accidents including harbour ditchings in these aircraft, and during the existence of the School, some 20 lives were lost. Part of Aircraftman Graham's duties was as an ambulance driver, liaising with the RAAF Crash Boat crews recovering the bodies.

On 4 January he was transferred to 62 Works Wing Headquarters (which controlled the RAAF's various Airfield and Works Construction Units). He was promoted to leading aircraftman (LAC) on 1 February and on 2 March embarked with his unit from Sydney via Brisbane and Townsville in convoy for Port Moresby, aboard an American Liberty ship with RAN and USN protection. At Brisbane Graham transferred to HMAS Arunta and described living conditions on board as poor, with 'roughly four hundred men sleeping side by side on the deck with no washing facilities'. After disembarking, he was assigned to airfield protection with a machine gun squad. For the next four months his unit was based at Port Moresby, repairing airfields and enduring Japanese air raids. Graham was also involved in the movement of transport taking troops up to the start of the Kokoda Trail.

On 1 September 62 Works Wing HQ transferred to Goodenough Island where Graham undertook driving and transport tasks. A month later, however, a glandular cyst was discovered in his neck and he was transferred back to Australia, receiving treatment at 3 RAAF Hospital at Concord, NSW. After convalesence, he was posted to a variety of stations, including 5 Aircraft Depot, Forrest Hill, Wagga (from 9 November 1943), 38 Squadron, Richmond (from 11 May 1944); 1 Personnel Depot, Ransford (from 11 August 1944); and 76 Wing HQ, Darwin (from 26 September 1944 until 22 November 1945. He remained in Darwin after the cessation of hostilities to assist with the transport and reception of Australian prisoners of war from Singapore. His final flight was an unofficial lift with his Commanding Officer in a Catalina from Darwin via Brisbane and Perth to Sydney, where he was discharged from service. As a farewell gift, the CO gave him this map.