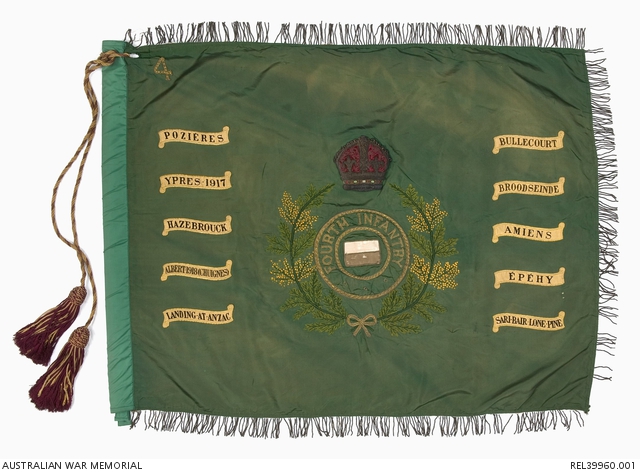 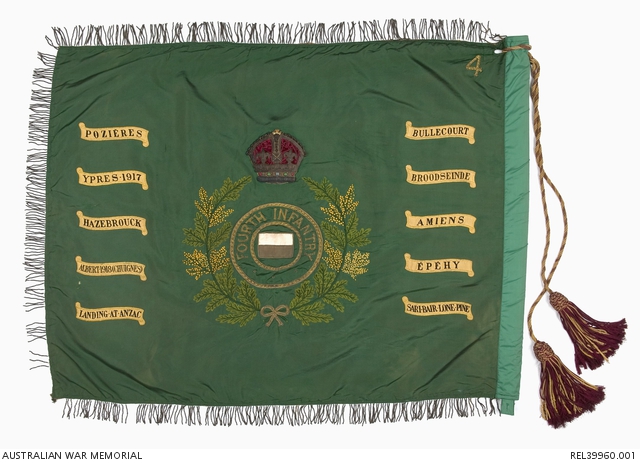 Double sided green silk Colour embroidered in the centre with gold bullion thread with 'FOURTH INFANTRY' within two circles. The inner circle bears a gold edged silk colour patch for 4 Battalion, AIF, in the form of a horizontally aligned white over dark green rectangle (the green has faded to khaki). Embroidered in heavy cotton around the outer circle is a wreath of wattle, tied at the bottom with an embroidered gold bullion bow. Above the wreath is a padded and appliqued king's crown in gold bullion thread, red silk velvet and embroidery cotton. The numeral '4' is embroidered in gold beside the upper end of the hoist. Ten battle honours, embroidered in black on yellow silk scrolls, are appliqued to the Colour, five on each side of the central device. Those at the hoist read (from the top) 'BULLECOURT', 'BROODSEINDE', 'AMIENS', 'EPEHY' and 'SARI.BAIR - LONE.PINE'. Those on the fly read (from the top) 'POZIERES', 'YPRES. 1917', 'HAZEBROUCK', 'ALBERT.1918 (CHUIGNES)' and 'LANDING. AT. ANZAC'. The upper and lower edges and fly are edged with a gold bullion fringe. Gold and crimson cotton cords and tassels are looped through a reinforced opening on the upper hoist and are a modern replacement from c 1970 for the original gold bullion and crimson silk cords. The hoist is also a modern replacement, in green synthetic fabric.

This Regimental Colour is one of a pair (see King's Colour at REL39960.002) presented to the 4th Infantry Battalion (Australian Rifles) in 1927 to recognise the service of the 4th Australian Infantry Battalion AIF, in the presence of veterans of the wartime AIF battalion.

The 4th Battalion, AIF, a New South Wales unit, part of the 1st Infantry Brigade, was raised soon after war was declared in 1914 and sailed for Egypt two months later, with the first convoy of troops to leave Australia. The battalion took part in the Anzac Landing on 25 April 1915, as part of the second and third waves, and was tasked with defending the beachhead. In August, together with the rest of the Brigade it led the charge at Lone Pine.

After the evacuation from Gallipoli the battalion trained in Egypt before moving to France for service on the Western Front in March 1916. Its first major action was at Pozieres on the Somme in July 1916. Later the battalion fought at Ypres, Belgium before returning to the Somme for winter. The battalion took part in a short period of mobile operations following the German withdrawal to the Hindenburg Line in early 1917. Later in the year it fought in the increasingly difficult conditions endured during the third battle of Ypres. In 1918 the battalion returned to the Somme and helped to stop the German spring offensive in March and April. It took part in the final offensives against the Germans, launched near Amiens on 8 August 1918. It was withdrawn for rest and reorganisation at the end of September and was still out of the line when the war ended on 11 November. During the war the battalion suffered 3,485 casualties, of whom 1,293 were killed.

This Colour, and its pair, were laid up at Christ Church, Cootamundra, NSW on 31 July 1960. They were transferred to St Anne's Church, Strathfield, in Sydney on 14 March 1970, before being transferred to the Australian War Memorial in March 2009.