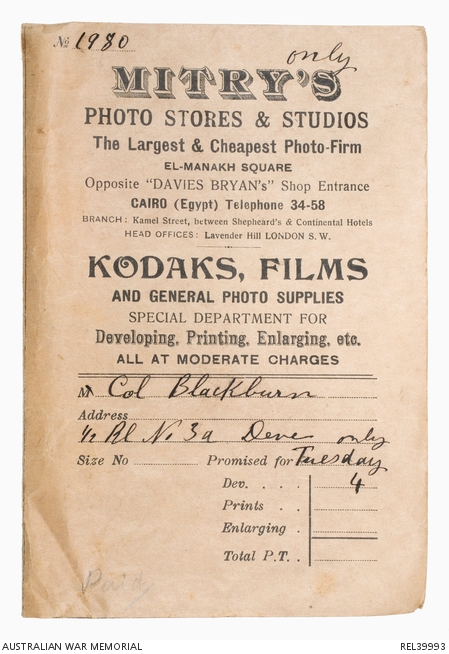 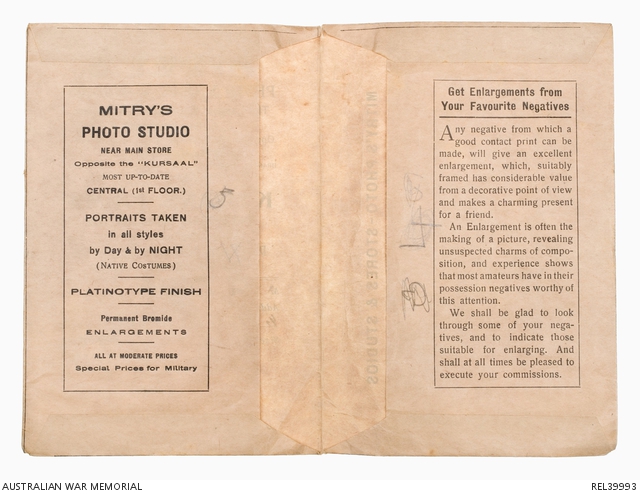 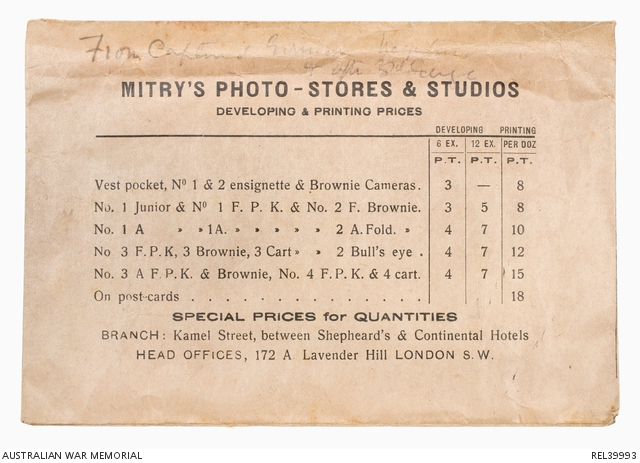 Brown paper photograph wallet, printed in black, to hold negatives and prints. The front is titled 'MITRY'S PHOTO STORES & STUDIOS/ The Largest & Cheapest Photo-Firm/ EL-MANAKH SQUARE/ Opposite "DAVIES BRYAN's" Shop Entrance/ CAIRO (Egypt) Telephone 34-58'. Addresses for the Egyptian Head Branch and London Head Office are also given. Beneath is an advertisement for Kodak films and supplies. The customer order number '1980' is written in the top left corner and his name , 'Col Blackburn' , address, and quantity of prints. The back of the wallet lists developing and printing prices for film from a variety of camera types. The internal pockets are printed with advertisements for portraits taken by 'Mitry's' and for photographic enlargements.

Charles Bickerton Blackburn was born at Greenhithe, Kent in England in 1874. In 1881 he arrived with his parents in South Australia. Blackburn studied medicine but after the closure of the South Australian medical school he moved to Sydney to complete his studies, graduating in 1899. He was associated with the Royal Prince Alfred Hospital for many years, as well as working in private practice and as a lecturer at the University of Sydney.

Keen to enlist in the AIF on the outbreak of the First World War, Blackburn was at first dissuaded from doing so by the University. In August 1916, however, at the age of 42, he joined the AIF as a lieutenant colonel and was posted to 14 Australian General Hospital (14 AGH), located at Abbassia near Cairo. Blackburn sailed to Egypt aboard RMS Kashgar and arrived in Egypt on 7 October 1916, joining 14 AGH the same day. He remained with the hospital until June 1917, when he was transferred to AIF Headquarters at Port Said, returning to 14 AGH in March 1918. In July he rejoined AIF Headquarters and then transferred in August to the Headquarters of the Desert Mounted Corps. Blackburn was twice mentioned in despatches and in 1919 was made an Officer of the Order of the British Empire. The recommendation for the award reads: 'For valuable and devoted work. As senior physician in the Australian Imperial Force in Egypt his influence has been considerable on the younger medical officers of the Australian Army Medical Corps. His professional capability is of a high order.'

Blackburn returned to Australia aboard the transport Euripides in March 1919 and resumed his medical career. He remained on the army reserve and in 1924 chaired the Commonwealth Royal Commission on the assessment of war service disabilities. He also served in the Second World War, as a physician at 113 Australian General Hospital at Concord in Sydney, again with the rank of lieutenant colonel.

Blackburn had a long and distinguished medical career as well as dedicating himself to the service of the University of Sydney. He was elected to its senate in 1919, continued to lecture part-time until 1934, was dean of medicine in 1932-1935. He was knighted in 1936, and, in 1941, appointed chancellor of the university in 1941, a position he held until he retired in 1964 at the age of 90. Sir Charles Blackburn died on 20 July 1972.

Charles Blackburn was a keen photographer and took many images during his service in Egypt and Palestine. This wallet originally contained some of the photographs and negatives he had developed in Cairo between 1916 and 1919.