A group of patients and nurses of the 3rd London General Hospital, having tea in the hospital ... 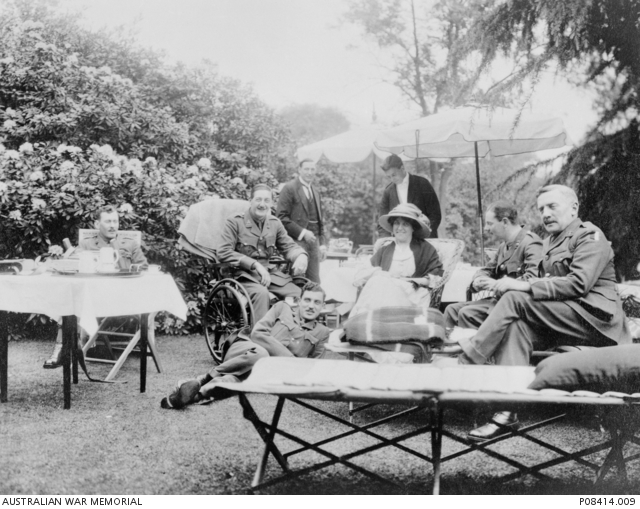 A group of patients and nurses of the 3rd London General Hospital, having tea in the hospital garden. Identified is, left, Captain Leslie Craig, 10th Light Horse Regiment. A farmer prior to enlisting on 28 October 1914, he embarked at Fremantle aboard HMAT Mashobra (A47) on 8 February 1915. Lieutenant Craig was serving with his unit at Gallipoli when he sustained gunshot wounds to his left leg and right arm on 7 August and was evacuated to Alexandria in Egypt. The injuries to his arm healed, but his left leg had to be amputated, and after further treatment was sent to England, being admitted to the 3rd London General Hospital at Wandsworth in June 1916.
He remained in London and was fitted for a prosthetic leg. While convalescing he met Francis Eileen Boyd, a Voluntary Aid Detachment from Ireland working at the hospital. They were married in her hometown of Lifford, County Donegal on 17 September 1917, and left England for Australia the following month. The couple made their home at Dardanup, Western Australia, and raised four children.