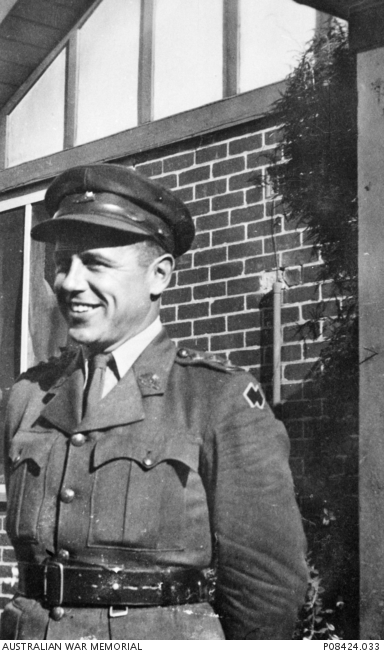 Informal outdoor portrait of VX38890 Captain (Capt) David St Alban "Dade" Dexter, 2/2 Independent Company (Sparrow Force), following his return from service in Timor, where the unit fought and evaded capture by the Japanese. 2/2 Independent Company was renamed 2/2 Cavalry Commando Squadron and fought in New Guinea and New Britain. Dexter was appointed Commanding Officer of a Commando Squadron operating in the Ramu Valley, New Guinea, for which he was mentioned in despatches. He was promoted to Major, and commanded 2/4 Independent Company at the Tarakan landing in Kalimantan. Dexter was wounded five times during his service. He was one of the five serving sons of Padre Walter Ernest Dexter DSO MC DCM, a mounted trooper in the Boer War and a military chaplain in the First World War. Following the war David Dexter wrote Part VI of the Official War History, The New Guinea Offensives. This image is from the collection of Lieutenant Paul Merrick (Mick) Dexter, who enlisted in the Royal Australian Naval Volunteer Reserve (RANV) in 1943, and was a watchkeeper and anti-submarine specialist on Corvettes between 1944 and 1946. (See PR00249 for private records of David Dexter relating to his active service as a commando officer in Timor and New Guinea.)