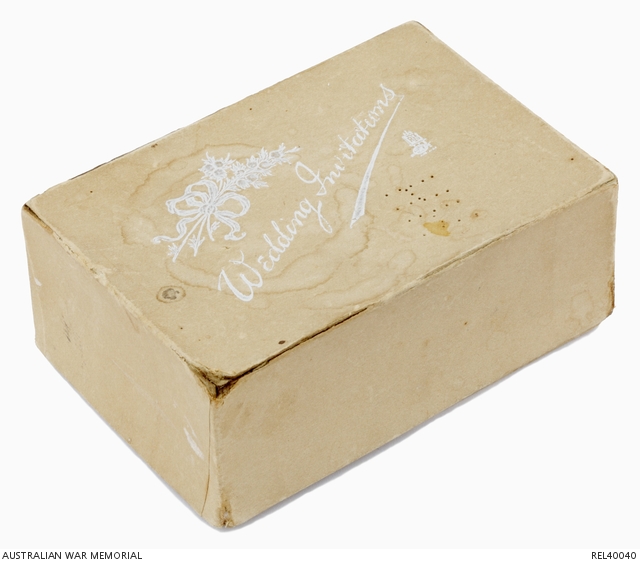 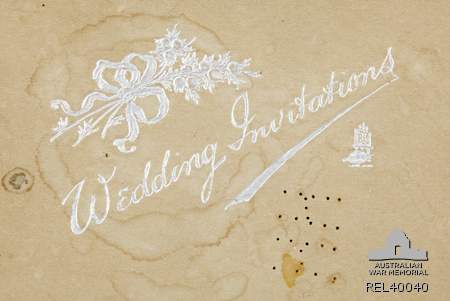 Two part cardboard box with 'Wedding Invitations' and a posy of flowers embossed on the cover in silver. There are several small pin holes in the cover below the embossed writing. On the reverse of the base is a star shaped sticker with faded red ink. In the corner next to this sticker is some faded pencil marks.

Charlotte Gertrude 'Lottie' Low was born in February 1893, the daughter of David and Blanch Low in Pambula New South Wales. With her father a Policeman, the family often moved around the state. Low trained at Royal Prince Alfred Hospital in Sydney and became a trained nurse. On 18 June 1917 she joined the Australian Army Nursing Service (AANS) in Sydney. Low embarked from Melbourne aboard HMAT Runic on 13 September 1917, arriving at Port Said in Egypt on 23 January 1918.

Upon arrival in Egypt she was posted to the 31st General Hospital in Cairo. During this time Low nursed both Allied and Turkish patients. She worked in Egypt for a few months before embarking for Australia on 14 April 1918 aboard the hospital ship, Kanowna. After returning to Australia she worked as a nurse at the St Georges Heights Auxiliary Hospital. During this time she met Henry Cuthbert Hill who was a patient at the hospital.

Henry had been severely wounded several times on the Western Front while serving as an infantryman with 36 Battalion AIF. After spending time at various hospitals overseas he was brought back to Australia to recover. They later married in Burwood, Sydney in 1922 and settled in Tumut, NSW. They had three children, Donald, Harry and Pamela. Henry passed away in Tumut in 1938 and Charlotte passed away in Sydney at age 83 on 5 November 1976.

One of their grandchildren, Group Captain Michael Carey, served as a member of the Royal Australian Air Force attached to the HQ Multi-National Force in Baghdad from December 2006 to June 2007.