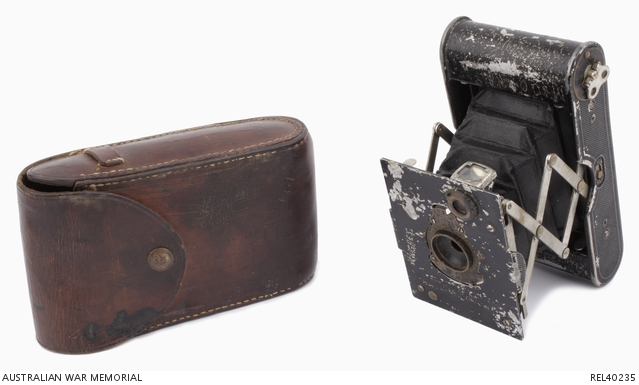 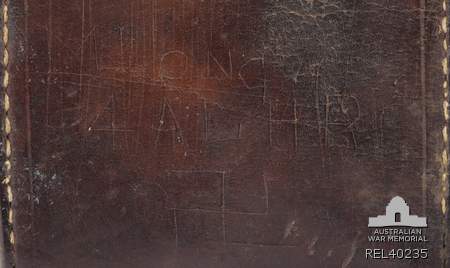 Black Kodak folding bellows Vest Pocket Autographic camera in original sewn, unlined leather case. Case has been marked with 'M Long 439' and a good luck swastika on the front cover. There are a pair of loops on each side of the case for a shoulder strap (not present), and a larger belt loop sewn to the reverse - the upper seam has been repaired with brass wire. The words 'F Marshman Long May 1942 418287 RAAF' are scratched into one end of the metal casing of the camera, while 'Macorna March 1911 M Long 439' has been scratched into the other.

Kodak 'Autograph' camera owned and used by Benjamin Marshman Long (junior), a farmer of Kerang, Victoria. Long enlisted, aged 20, on 22 August 1914 at Kerang with 4 Light Horse Regiment and embarked for overseas service aboard HMAT Wiltshire from Melbourne on 19 October 1914. He had previously served with the Militia, spending 2½ years with 17 Light Horse Regiment. He served with 4 Light Horse Regiment at Gallipoli, where much of the regiment's time was spent in defence, most frequently around Ryrie's Post, but its squadrons were involved in several minor attacks. It left the peninsula on 11 December 1915. After a short period of illness over late December - early January 1916 where Long was treated at 5 Australian General Hospital (AGH) at Mudros, he rejoined his unit at Heliopolis on 16 January.

In the meantime, his father, also Benjamin Marshman Long, enlisted (aged 47) with 1 Squadron, 1 Remount Unit on 15 September 1915 under service number 97. His age did not assist in enduring the rigours of military life in a harsh climate and he was transferred to hospital at Heliopolis on 29 April 1916 suffering from heat stroke. By October 1916 he had been returned to Australia and discharged.

Trooper Long was promoted to Lance Corporal on 19 May 1917. Soon after, on 5 July at Kazar, he suffered a malaria attack and was sent to 2 AGH at El Arish on 7 July then on to 14 AGH at Abbassia. His hospital notes state that while he quickly recovered from malaria, he complained of chest pains and discomfort, but was released back to his unit on 16 August, rejoining them at Kazar on 25 August. Less than a month later, on 16 September while at Tel-el-Fara he again became ill and was transferred to 14 AGH on 21 September. His Medical Board Examination Report of 10 October 1917 continues the story:

'Has had pain in chest on exertion for 12 months. Only reported sick to his MO once. Before enlistment never had any long or serious illness. Admitted 14 AGH 10 July 1917 with malaria, coming on one week before admission. No malarial attacks in hospital and complained only of praecordial pain & discomfort. Complains of pain all over front of chest & of shortness of breath. X-Ray shows shadow aorta is very much enlarged indicating considerable dilation. Whole heart shadow larger than normal. Patient returned to Hospital on 21.8.17 complaining of pain in left side & of dyspnoea on exertion.'

Trooper Long was diagnosed with permanent cardiac disease, caused by 'long continued strain on active service', which halved his physical capacity. He was returned to Australia, where he was discharged on medical grounds and granted a pension of 3 pounds a fortnight. He spent the remainder of his life at Glenarm Private Hospital, Kerang. In late May 1919 his mother, Eleanor, wrote to the Department of Defence: 'I beg to inform you that my son 439 Trooper B M Long passed away at Private Hospital Glenarm Kerang on 12 May 1919.'

The camera was then passed to Long's nephew, Frank Marshman Long, born 4 January 1924, of Macorna, just south of Kerang, who enlisted with the Royal Australian Air Force on 15 May 1942. After initial training at Narrandera and Uranquinty, Long embarked for England aboard the troopship Denbyshire and after converting to twin engine aircraft was posted to Cairo. Whilst at the Air Force Transit Camp he noticed a call for volunteers to join No 3 Wing, South African Air Force as second pilots. Long applied, was accepted and was soon flying Martin Marauders with 21 Squadron (SAAF) out of Jesi in Italy. He flew 44 missions as second pilot and a further 22 as first pilot. He survived the war and returned to Australia where he was discharged on 3 January 1946.