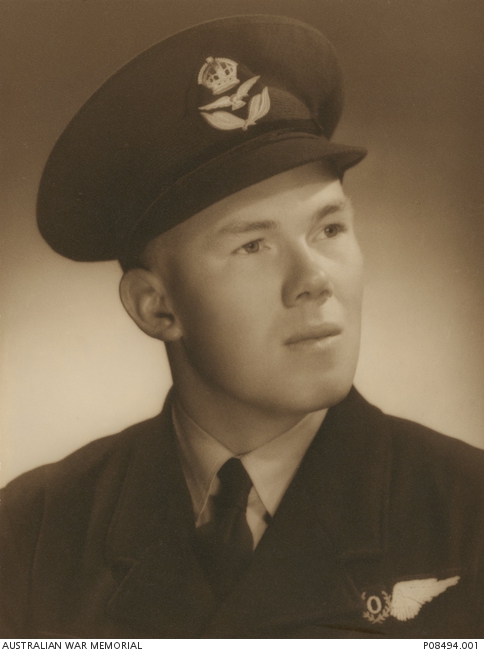 Studio portrait of 408888 Leading Aircraftman (LAC, later Flying Officer [FO]) Thomas Maxwell Taylor of Leongatha Vic. He was a bank clerk in civilian life, and became a member of the Australian Military Forces (AMF) from August 1939, reaching the rank of Sergeant; later (20 June 1941) he enlisted in the RAAF and trained in Canada and England under the Empire Air Training Scheme, subsequently being promoted to Pilot Officer on 25 June 1942 and Flying Officer on 25 December 1942. On the night of 16 April 1943, FO Taylor was the air bomber on Lancaster ED379 when this aircraft with 7 crew members left RAF base Holme-on Spalding on a mission to Pilsen, Czechoslavakia. It was shot down by flak and crashed at Nuremberg, Germany on 17 April 1943. One crew member managed to parachute from the aircraft and was taken as a POW; the others including Taylor were all killed, and are buried in the Durnbach War cemetery, Bayern, Germany. FO Taylor was 20 years of age at the time of his death..