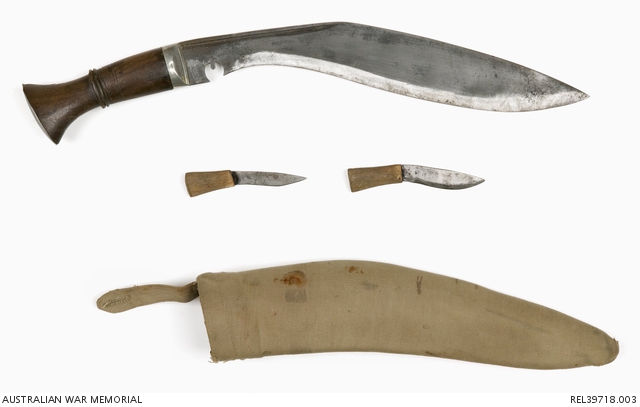 Karda knife. Part of a set of two small knives used in conjunction with a kukri. This knife has a multitude of uses, though it is primarily used for skinning animals. This example has a similar blade shape to it's parent kukri and shows signs of it's service. The handle of the knife is wood and is glued to the blade using the traditional method of tree sap. The end of the blade's tang is visible at the back of the handle.

Associated with the service of Major Leslie Welbourne Bowley who served with the British Army during the Second World War.

Bowley's youth was marked by tragedy when his father was killed in the early months of the First World War. His father, Second Lieutenant Thomas Henry Bowley, had been a career solder, enlisting in the Border Regiment in 1893. He served during the Boer War and remained with the Border Regiment after returning home. By 1914 he was a company sergeant major. He accepted a commission after the outbreak of the First World War, landing at Zeebrugge, Belgium, with 1 Battalion, the Leicestershire Regiment, on 6 October 1914. He was killed a few weeks later at Kruiseek Hill in Belgium on 26 October 1914. He has no known grave, and his name is listed on the Ploegsteert Memorial.

Leslie Bowley's mother, Louisa, struggled to cope with the loss of her husband and Bowley was sent to Christ's Hospital school in Horsham, West Sussex. The school accepted the sons of less fortunate parents. After completing school, Bowley went to work in the foreign department of the bank of Messrs Coutts and Company. In 1932, Bowley began serving in the British Territorial Army, first with the Imperial Cadet Yeomanry and later with the 54th (City of London) Heavy Anti-Aircraft Regiment. He was granted a commission in the late 1930s. During this period he married and began a family.

In July 1939, Bowley requested, and was granted, a short service regular engagement as an instructor to the militia. He remained in this role until October 1939. In November, he embarked for France, but was instead diverted to India, arriving there in December. During this period he was promoted to captain. Bowley and his battery were sent to Iraq in May 1941, to assist in quelling a rebellion, led by Rashid Ali. The conflict lasted less than a month, with Ali's forces defeated, and the British backed government restored.

Bowley and his unit were next sent to Burma, where from December 1941 it was engaged continuously from the fall of Rangoon to the Chindwin River. Here the battery's guns and equipment were all destroyed and the survivors marched back to India through Manipur. Bowley was wounded at Yen Angyaung, Burma in April 1942 during the retreat through the oil fields there.

Bowley rejoined his regiment at Arakan in June and was promoted to major the same month. He was placed in command of a Light Anti-Aircraft battery. During this period, Bowley was shot by a Japanese sniper who was positioned in a tree. The round passed through Bowley's ribs and missed all of his vital organs. Incensed, Bowley found and killed the Japanese soldier. The Japanese soldier had been using an old single shot rifle, and was unable to reload his weapon before Bowley reached him. After recovering from his wound, Bowley was posted to act as the Air Liaison officer with the RAF and US forces. He flew into China on missions to supply arms and food to Chinese forces.

Wracked with illness, Bowley was sent back to England in July 1944. He was posted to an Artillery Training School in Wales. Conveniently, his wife and son were also in Wales, after having been evacuated from London during the Blitz. Upon arrival at the family's house, his wife barely recognised the emaciated man before her and their son was initially terrified. Bowley saw out the remainder of the war with the Artillery Training School. After the end of the Second World War, Bowley returned to the foreign office of Messrs Coutts and Company, who had kept his job open for him. Leslie Bowley died in 1967.