The 11th Battalion marching out of Blackboy Hill camp where they have been training. The unit ... 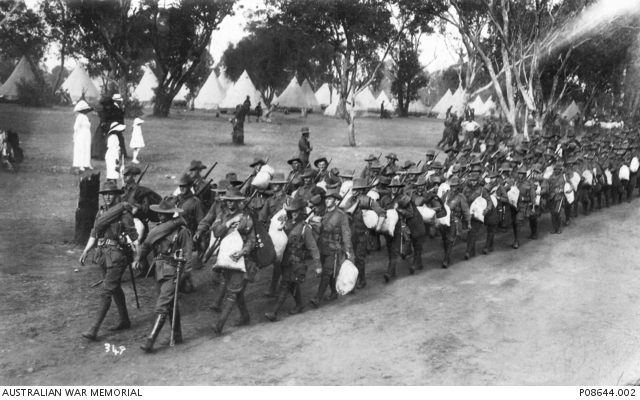 The 11th Battalion marching out of Blackboy Hill camp where they have been training. The unit embarked from Fremantle on 2 November 1914 bound for further training in Egypt before landing on Gallipoli. Identified second row from the front is 944 Private (Pte) John Salter who is carrying a dark kit bag with his regimental number painted onto it. Pte Salter was shot in the face at during the landing at Gallipoli on 25 April 1915 and sent to England for treatment. He returned to Australia in January 1916 and after recuperating was trained and commissioned a 2nd Lieutenant in the 51st Battalion. He joined his unit in France in August 1918 and and was awarded the Military Cross (MC) for bravery North West of Mont Saint Quentin during the period 10th -20th September 1918.