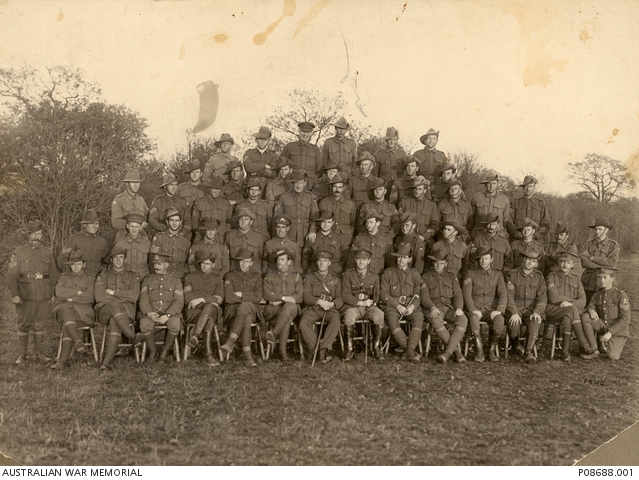 "NCOs of 7th Brigade comprising 25, 26, 27 & 28th Battalions prior to their amalgamation with 6th Brigade, 21, 22, 23, 24th Battalions. Cuttting up the funds of the Sergeants Mess consisted of a Theatre Night, a Photo each and a few drinks. Captain Maisey the Military manic in the centre one arm." 'Captain Maisey', front row, seated eighth from the left is Captain George Meysey Hammond, also known as Meysey George Hammond. He enlisted as a Corporal in the 28th Battaltion in February 1915, served at Gallipoli and was awarded a Military Medal as a Sergeant. Hammond was wounded in the leg at Pozieres and lost the use of his left arm at Flers in 1916, but insisted on returning to front line service. Promoted to Lieutenant, he was awarded the Military Cross in 1917 for his actions at Polygon Wood, and subsequently promoted to Captain. Hammond died of wounds at Morlancourt on 14 June 1918 and was posthumously awarded a Bar to Military Cross for his deeds at Morlancourt.