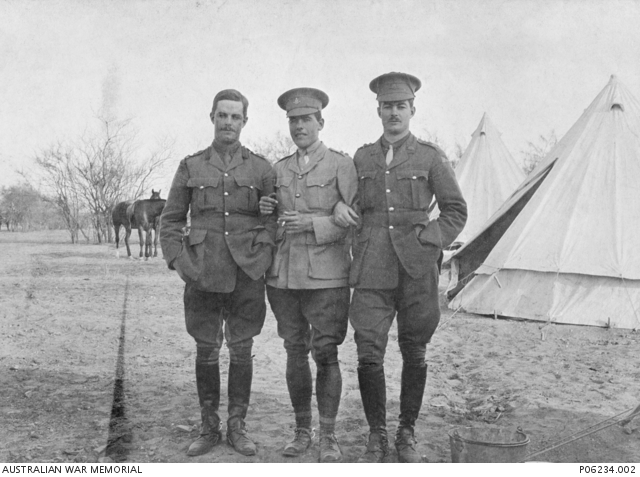 Group portrait of Lieutenant Cyril Albert Clowes (left), his brother Lieutenant Norman Clowes (right) and Captain Eric Lacy Vowles (central) who was awarded the Military Cross. The Clowes brothers had distinguished military careers that spanned the first half of the twentieth century. Cyril Albert Clowes was born in 1892 in Warwick, Queensland; Norman the following year. They were educated at Toowoomba Grammar School before entering the Royal Military College, Duntroon in 1911. On 14 August, the brothers and other cadets underwent a special graduation for service in the Expeditionary Force and were appointed Lieutenants in the AIF; Cyril was posted to the 1st Field Artillery Brigade (FAB) and Norman to the 3rd FAB. Cyril landed on Gallipoli on 25 April 1915 and served as a forward observation officer directing naval gunfire against Turkish positions. In January 1916 he was promoted to Captain in the 2nd Division Artillery. He served as the Division's Trench Mortar Officer and was awarded the Military Cross for actions at Bois Grenier in 1916. In 1918, as Brigade Major, he was awarded the Distinguished Service Order for his work at Villers Bretonneux in August of that year. Following the war, Cyril Clowes served as an instructor at Duntroon and undertook training and command duties. He was promoted to Colonel in November 1939 after taking command of 6th Military District, Tasmania. In 1940 Cyril Clowes served in the 2nd AIF as a Brigadier in the Royal Australian Artillery, serving in North Africa and in Greece. Returning to Australia in January 1942 Cyril Clowes was promoted to temporary Major General and given command of 1st Division. He was sent to Port Moresby in July and given command of what became known as Milne Force. He reached Milne Bay four days before the Japanese attacked, his forces defeating the latter after a long and difficult fight in arduous conditions. Cyril Clowes was the first allied commander to win a land victory over the Japanese during the Second World War and he was made a Commander of the British Empire in recognition of his 'meritorious service at Milne Bay in August, 1942'. Despite this, he received little support from the Australian Commander-in-Chief, General Blamey. He returned to Australia in 1943 and held no further active command posts. Cyril Clowes retired in 1949 with the rank of Lieutenant-General. Norman Clowes landed at Gallipoli at the same time as his brother and was wounded on the 5 May with a gun shot wound to the chest. Following hospitalisation in England, he rejoined his unit at Gallipoli, and subsequently saw service in France and Belgium. He was awarded the Military Cross in January 1917, and a Distinguished Service Order and Croix de Guerre the following year. In 1917 Norman Clowes was posted for duty as a Brigade-Major with the 6th Imperial Division Artillery with who he remained for the duration of the war. Following the war, he graduated from the British Army Staff College at Camberley, Surrey in 1920 and then served on exchange with the Indian Army from 1922-1930. He transferred to the British Army in 1931 and commanded the 1st Battalion of the Manchester Regiment, serving in the Palestine Rebellion in 1937-1938. He was promoted to Colonel in 1939 and served as General Staff Officer, 1 British Military Mission to Egypt until 1941, then Brigadier General Staff British Troops in Egypt. From 1946 until his retirement in 1949 he served as Aide-de-Camp to King George VI. During his military career he was awarded the CBE, DSO, MC, and was Mentioned in Despatches 5 times.