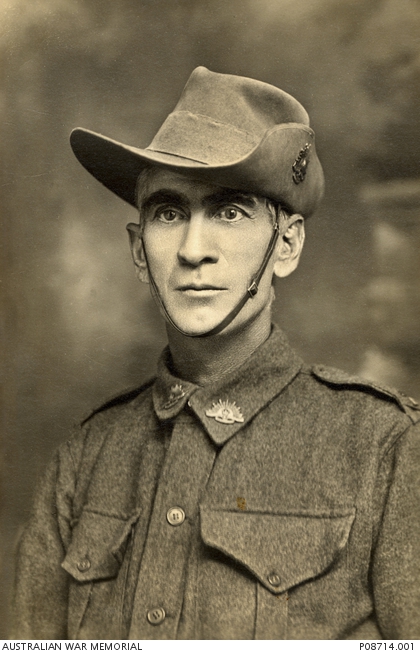 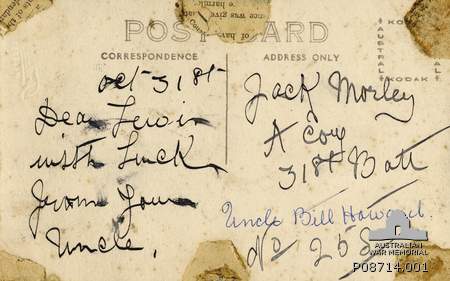 Studio portrait of 258 Private (Pte) William John Howard, 31st Battalion from South Woodburn, NSW; originally of Yambuk, Victoria. Pte Howard enlisted under the alias of John Morley and listed his place of birth as Calcutta, India and his age as 44 years. He was 46 year old and in 1915 the age requirements for enlistment were 18-45 years. A painter prior to enlisting on 15 July 1915, Pte Howard embarked for overseas with A Company from Melbourne on 9 November 1915 aboard HMAT Wandilla. After training in Egypt he arrived in France for service on the Western Front on 23 June 1916. Pte Howard was killed in action on 20 July 1916 at Fleurbaix, France, during the Battle of Fromelles. After the war his grave could not be located and he was commemorated on the VC Corner Australian Cemetery Memorial, Fromelles. In 2008 a burial ground was located at Pheasant Wood, France containing the bodies of 250 British and Australian soldiers including Pte Howard. All of the remains were reburied in the newly created Fromelles (Pheasant Wood) Military Cemetery. At the time of the official dedication of the new cemetery on 19 July 2010, ninety-six of the Australians, including Pte Howard, had been identified through a combination of anthropological, archaeological, historical and DNA information. Work is continuing on identifying the other remains relocated from the burial ground and buried in the new cemetery as unknown soldiers.