Commander of the Most Excellent Order of the British Empire - neck badge (Military division) : Group Captain A T Cole, RAAF 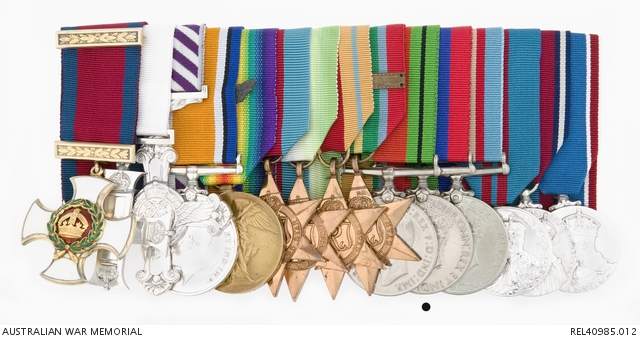 Associated with the service of Group Captain Adrian Lindley Trevor 'King' Cole. Cole was born in Glen Iris, Victoria on 19 June 1895 and was educated at both Geelong and Melbourne Grammar Schools. He joined the Cadet Corps at the latter and became a member of the 1911 Australian Coronation Contingent, for the coronation of King George V. At the outbreak of the First World War Cole received a commission in the Australian Military Forces and served in 55 (Collingwood) Infantry with the rank of second lieutenant. He resigned his commission at the beginning of 1916 and joined the Australian Flying Corps (AFC) on 28 January. Embarking for overseas service aboard HMAT Orsova on 16 March, Cole disembarked at Suez on 14 April. Graduating as a flying officer on 7 November he began flying reconnaissance and scouting operations in support of the Egyptian Expeditionary Force's advance to Palestine.

Cole was promoted captain on 15 August 1917 and the next day was awarded the Military Cross for operations carried out over Gaza. He was struck off strength 1 Squadron on 5 December and sailed for the United Kingdom. On arrival he was posted to 5 (Training) Squadron, AFC where he underwent a course of instruction at the School of Special Flying, Gosport. On 25 May 1918, he embarked for the Western Front, joining 2 Squadron, AFC. Cole recorded nine victories between July and October and was awarded the Distinguished Flying Cross for his actions on 7 October during a low-flying raid east of Lille. He returned to Australia in March 1919 and his appointment in the AIF was terminated on 20 June.

On 31 March 1921 Cole accepted a permanent commission in the newly formed Royal Australian Air Force (RAAF), becoming one of the RAAF's original founding officers. He commanded 1 Flying Training School, Point Cook from 1926 until 1929 and was a member of the Air Board from 1933. He was heavily involved in the organisation of the 1934 International Air Race and promoted group captain on 1 January 1935. He was appointed Commander of the Most Excellent Order of the British Empire in the George VI Coronation Honours on 11 May 1937. At the outbreak of the Second World War, Cole was Commanding Officer, RAAF Station Laverton and was placed in command of the newly formed 2 Group RAAF. He was promoted temporary air commodore in December 1939 and in September 1941 was posted to the RAF's Western Desert Air Force, North Africa as Commanding Officer of 235 Wing. There he also helped to form 456 Squadron RAAF, a new anti-submarine warfare unit.

Recalled to England in May 1942 to serve at Headquarters 11 Group, Cole was awarded the Distinguished Service Order for his gallantry as a Forward Air Controller aboard HMS Calpe during the Dieppe Raid of 19 August. In October he was appointed Air Officer Commanding (RAF) Northern Ireland with the rank of acting air vice marshall. Returning to Australia in May 1943, Cole was appointed Air Officer Commanding, North-Western Area, Darwin where he commanded offensive operations in the New Guinea campaign. By April 1944, Cole had 13 Squadron, RAAF under his command and was supporting amphibious operations against Hollandia and Aitape. In May as part of Operation Transom, he directed bombing from the North-Western Area to Surabaya in the occupied Dutch East Indies. Appointed Air Member for Personnel in October 1944, Cole left for Ceylon in January 1945 to assume the post of RAAF Liaison Officer on the staff of the Supreme Allied Commander, South East Asia. Cole served in this role until the end of the war, and was Australia's senior representative at the formal surrender Japanese in Singapore on 12 September.

Cole retired from the RAAF in April 1946 with the rank of honorary air vice marshal. He died of chronic respiratory disease on 14 February 1966 in Heidelberg Repatriation Hospital. After an air force funeral in the Anglican chapel, RAAF Station, Laverton, his body was interred in the family vault at Camperdown cemetery.