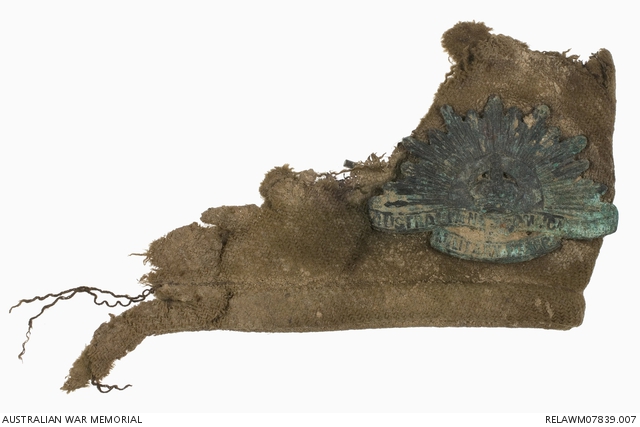 Remains of a proper right side collar from an Australian tunic with Rising Sun badge, coated with verdigris, still attached. The two lugs on the back of the badge are inserted through the fabric and held in place with a split pin.The point of the collar is now permanently turned under the rest of the collar, which bears remnants of dried mud, after four years lying in the open (1915-1919) in this position.

This piece of tunic collar was found on 10 January 1919 by Lieutenant William Hopkin James, who was working on Gallipoli, leading a small party from the Australian War Records Section, taking photographs and collecting items for the national collection. James found fragments of uniforms and bones in a gully between Quinn's Post and Dead Man's Ridge, leading up to the Bloody Angle. They were the remains of members of the 16th Battalion (Bn), who had attempted to extend the Australian line, to the left of Quinn's Post from 2 to 3 May 1915.

At dawn on 3 May, the New Zealanders withdrew under heavy fire and the Turks occupied their line. The Turks in front of the 16th Bn attacked, but were driven back. The 16th Bn then attempted to attack a Turkish position, from which heavy rifle fire was coming, but the Turks were alerted to the attack and their machine gun fire from Baby 700 raked the line. In addition, nearby Turks threw bombs and expended heavy fire on the men of the 16th Bn. The dead lay thickly between their respective positions.