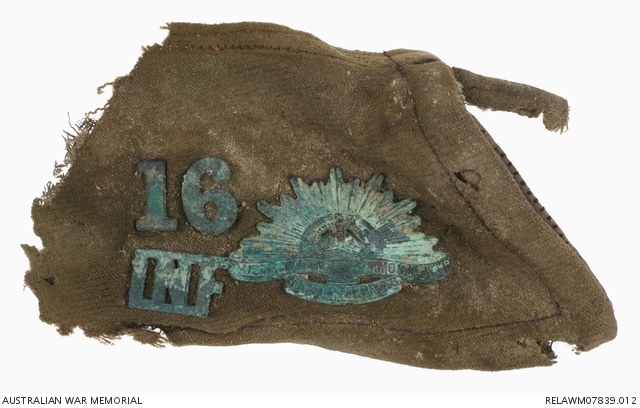 Remains of a proper right side Australian officer's tunic collar. Attached to it are a Rising Sun badge and three other badges to its right, reading '16 / INF'. Each badge has two lugs held in place, with the exception of the numeral '1', by split pins. The open edge of the collar bears a brass hook which would have have fastened into a corresponding eyelet on the other side of the collar.

This piece of tunic collar was found on 10 January 1919 by Lieutenant William Hopkin James, who was working on Gallipoli, leading a small party from the Australian War Records Section, taking photographs and collecting items for the national collection. James found fragments of uniforms and bones in a gully between Quinn's Post and Dead Man's Ridge, leading up to the Bloody Angle. They were the remains of members of the 16th Battalion (Bn), who had attempted to extend the Australian line, to the left of Quinn's Post from 2 to 3 May 1915.

At dawn on 3 May, the New Zealanders withdrew under heavy fire and the Turks occupied their line. The Turks in front of the 16th Bn attacked, but were driven back. The 16th Bn then attempted to attack a Turkish position, from which heavy rifle fire was coming, but the Turks were alerted to the attack and their machine gun fire from Baby 700 raked the line. In addition, nearby Turks threw bombs and expended heavy fire on the men of the 16th Bn. The dead lay thickly between their respective positions.

When unit titles were introduced in September 1914, officers were instructed to wear the unit titles on their collars (beside their Rising Sun badges), while other ranks wore them on their shoulder straps. Several officers were killed at the Bloody Angle on 2 May. They were: Lieutenant Kieran Leopold Anderson, Lieutenant Ernest Otto Alfred Bruns, Second Lieutenant Harry James Burton, Lieutenant Cyril Arthur Geddes, Lieutenant William Buchanan Kerr, Captain James Miller and Captain Harold Alfred Southern. This collar came from one of their tunics.