Group portrait of members of the Schmahl family. From left to right, back row: Leopold; William, ... 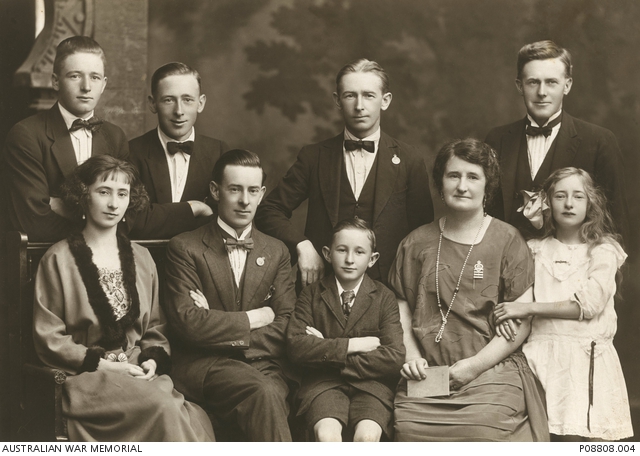 Group portrait of members of the Schmahl family. From left to right, back row: Leopold; William, Gottlieb (George), Gordon Lionel. Front row: Vera; Victor Hugo; Clive; Mary; mother Ada; and Sylvia. The father Adolphus Frederick Anton (Adolph) Schmahl is absent. Sons George and Victor are wearing Returned Servicemen badges (Gordon would have been entitled to one also but is not wearing it) and Ada is wearing her Female Relatives Badge with three bars, representing the service of her husband and three sons in the First World War. The father may have been absent as he was a member of the Rabaul garrison 1919-1921. 1728 Private (Pte) Adolphus Frederick Anton (Adolph) Schmahl, Naval and Military Expeditionary Force, enlisted on 15 January 1919 and served in Rabaul for over two years working as a German translator in the Lands Department and as a court secretary, translator and interpreter, attaining the honorary ranks of Company Sergeant Major and Warrant Officer Class 1. Schmahl was born in Hamburg, Germany, in 1871 and emigrated to Australia 1887, applying for naturalization in 1911. A manufacturing chemist by profession, he worked in NSW and Victoria after arrival in Australia and married Ada Dent of Adelaide, SA. They had eight children: six boys and two girls. In 1915 he put his age down to 43 and enlisted in the AIF under the alias George Albert Edward Fraser because he "found it impossible to join the Forces under the name of Schmahl". He embarked for service on 5 October 1915 with the 6th Reinforcements, 21st Battalion. He transferred to the 7th Battalion in February 1916 and was promoted to corporal, was wounded at Pozieres, returned to his unit and was promoted to lance sergeant then sergeant. He was wounded at Geudecourt. In February 1917 he was returned to Australia suffering "excessive age and cardiac debility" (he was aged 53). In the field he had confessed to his commanding officer Lieutenant Colonel C H Jess that he was serving under an alias and had received the reply "I have no time for private conversations, I only know you as Fraser, you will do me". After his return to Australia he wrote to Senator George Pearce, Minister of Defence, explaining his position and offering himself for further service; this offer was declined on the grounds of age. He attempted to join the Naval Guard and Instructional Staff School and on 28 August 1918 he joined the Home Service working as a clerk at the Base Hospital under the name of Fraser. He was denounced as a spy by someone and he dictated an affidavit that outlined his loyalty and prior military service along with that of his family. From 1924-1930 and 1933-1936 Adolph Schmahl was appointed to translate German files for the Public Service, Territory of New Guinea. Three of his sons enlisted in the AIF also Gottlieb (served as 420 George Schmahl, awarded Military Medal) and brothers Victor and Gordon enlisted in the Sportsmans Thousand, serving with the 46th Battalion.