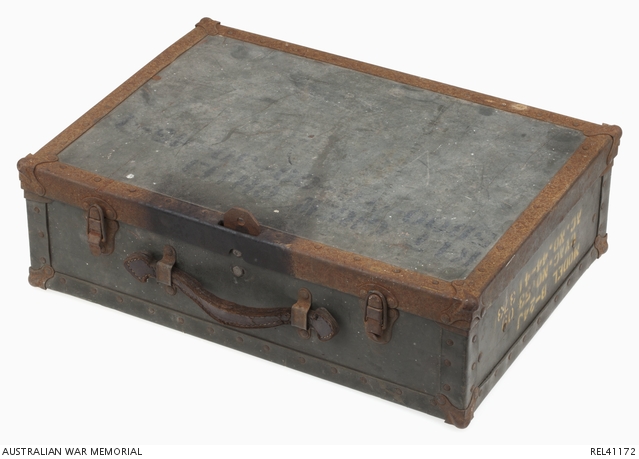 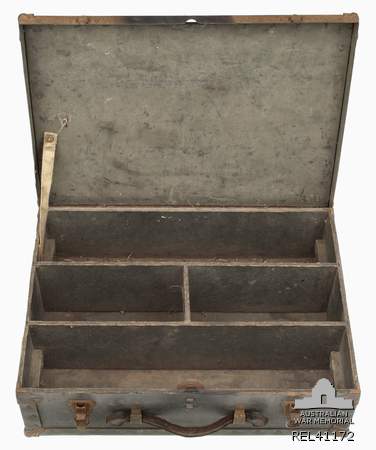 Empty consolidated B-24J Liberator bomber tool box. The box is a rectangular shape with a separate hinged lid. The panels of the box are thin plywood and have been joined together along the edges by metal strips that have been rivetted to the wood. The corners of the main box and the lid have been joined and reinforced with shaped metal pieces which have also been rivetted.

The lid of the box is held closed by two latches. The box has a metal tongue attached to the base. This has a hole for a metal 'D' attachment on the front lid. When closed, the box can be locked by threading a padlock through the metal 'D'.

A thick leather handle has been secured to the box between the two latches by a pair of metal keepers which are rivetted to the box. The handle has spear point ends which stop the handle from being pulled free of the keepers when being carried. Inside the box is a wooden partition in the shape of a lengthways 'H'. This has divided the box with two long outer storage areas and two smaller inner storage areas.

This tool box was used by the crew chief in charge of the maintenance of Consolidated B-24J Liberator bomber A72-66 (US registration 44-41373). The aircraft was delivered to the RAAF in September 1944 but did not fly operationally with 21 Squadron, RAAF until January 1945.

Initially this aircraft was based at Fenton Airfield in the Northern Territory, before moving to Morotai, New Guinea with a detachment of other 21 Squadron Liberators and their ground crews in April 1945.

On the morning of 31 July 1945, Liberator A72-66 piloted by Flying Officer Jack Bonfield Faviell, took off as part of a two aircraft strike force sent to bomb Japanese anti-aircraft positions at Lolobata in the Halmaheras Islands. The weather was poor and there was low cloud cover and heavy rain all the way to the target area.

The lead Liberator piloted by Squadron Leader Angus MacLeod Greenfield, had no contact with Liberator A72-66 from the time the aircraft took off until Greenfield landed his Liberator in the early afternoon. Many searches were carried out over the next week, but no trace of the missing Liberator or the crew was found. The remainder of the 21 Squadron detachment to Morotai returned to Australia in November 1945.