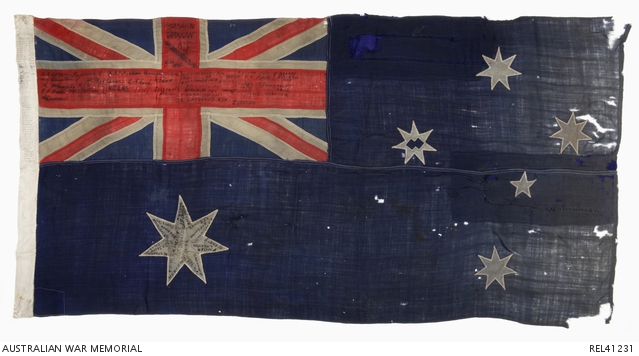 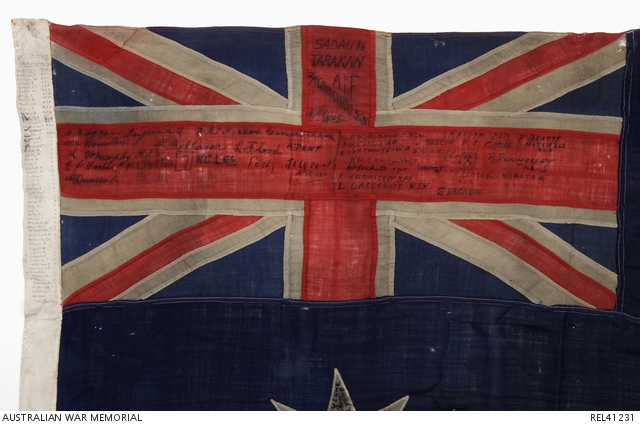 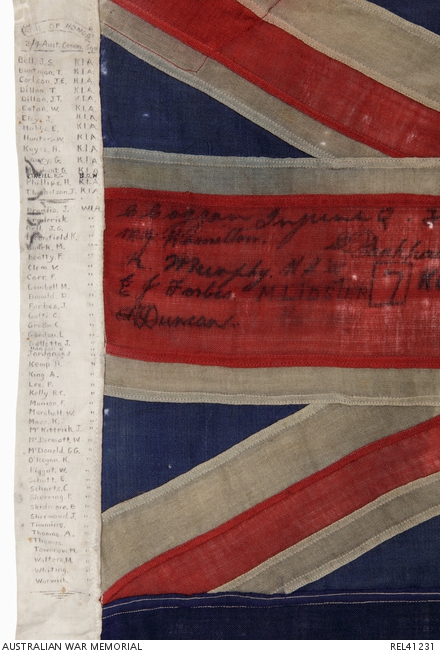 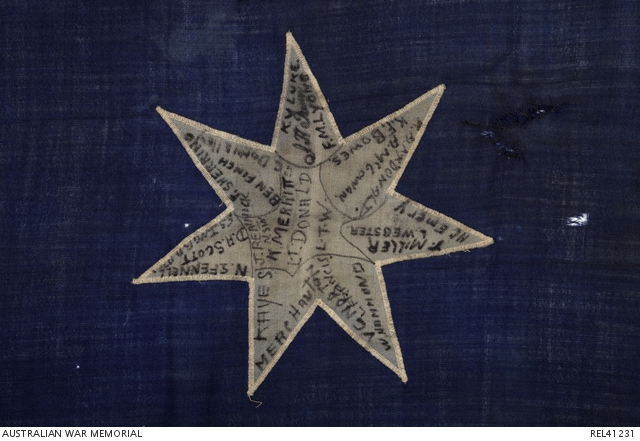 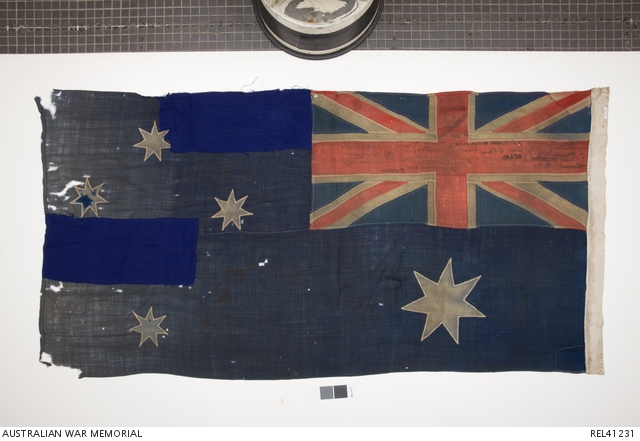 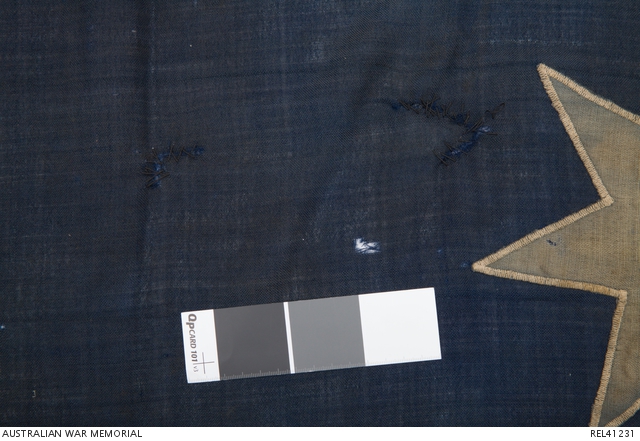 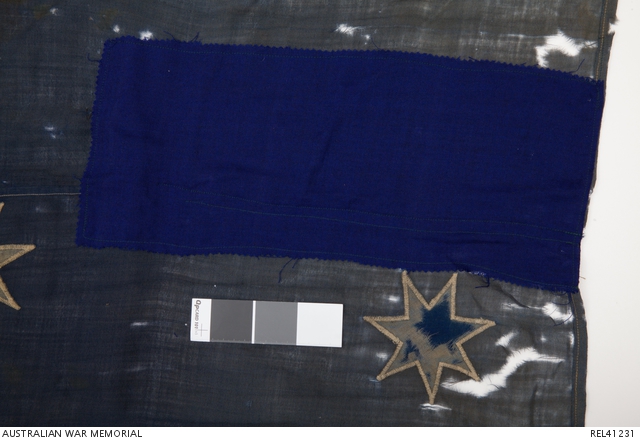 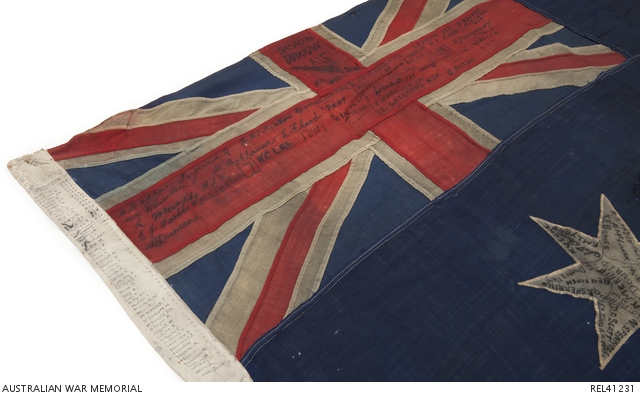 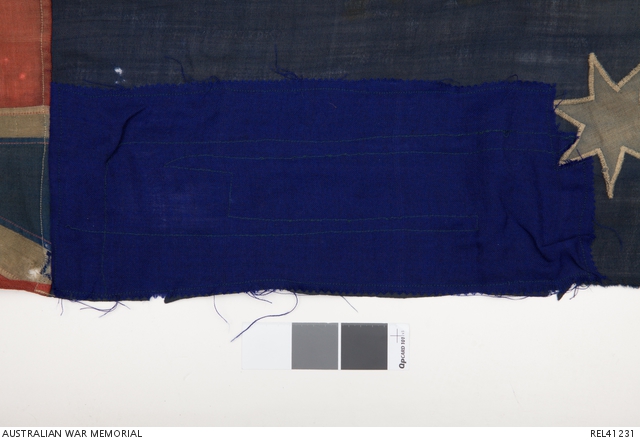 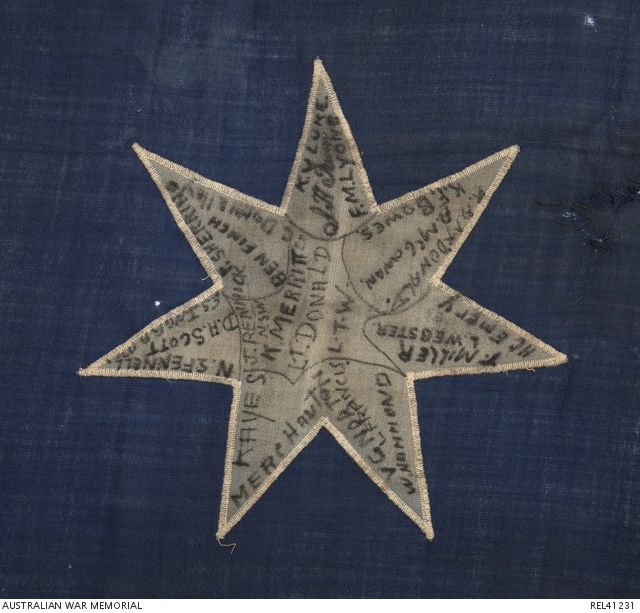 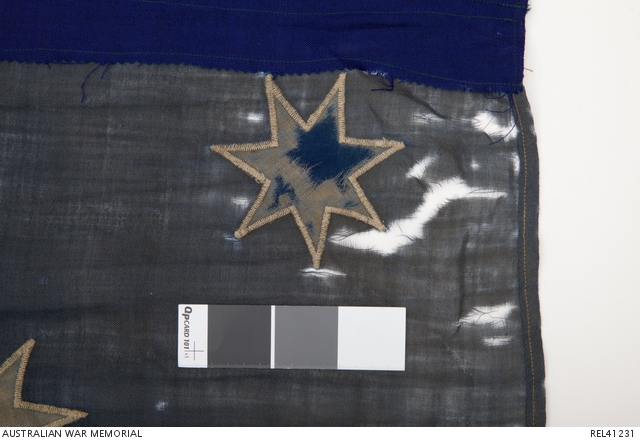 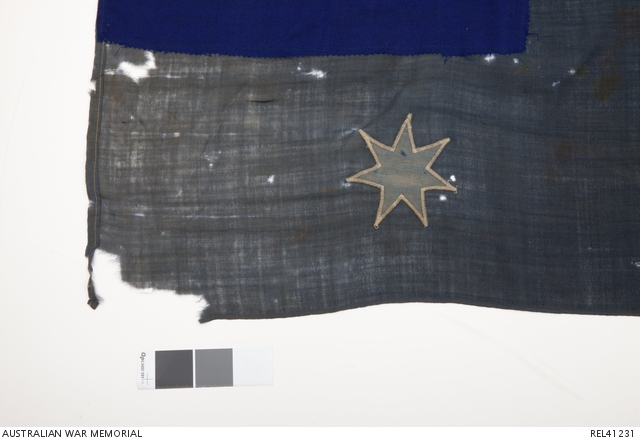 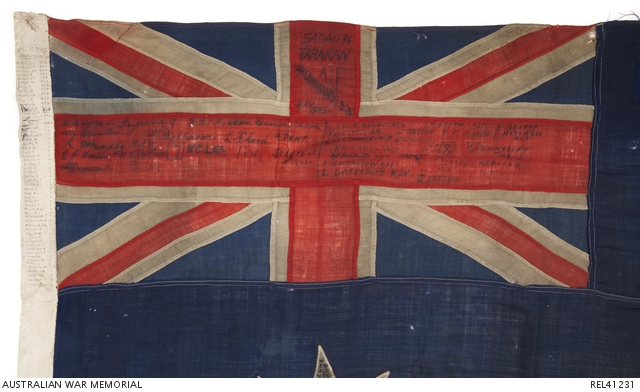 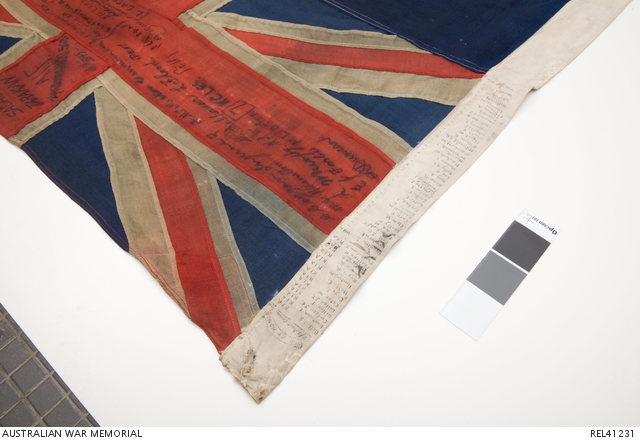 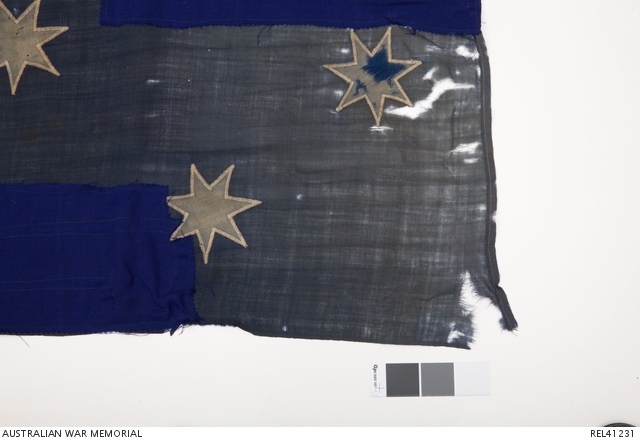 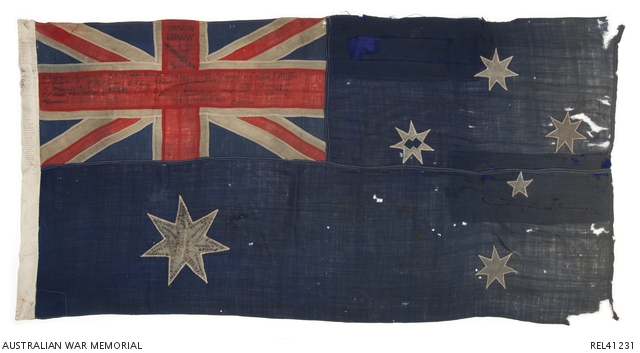 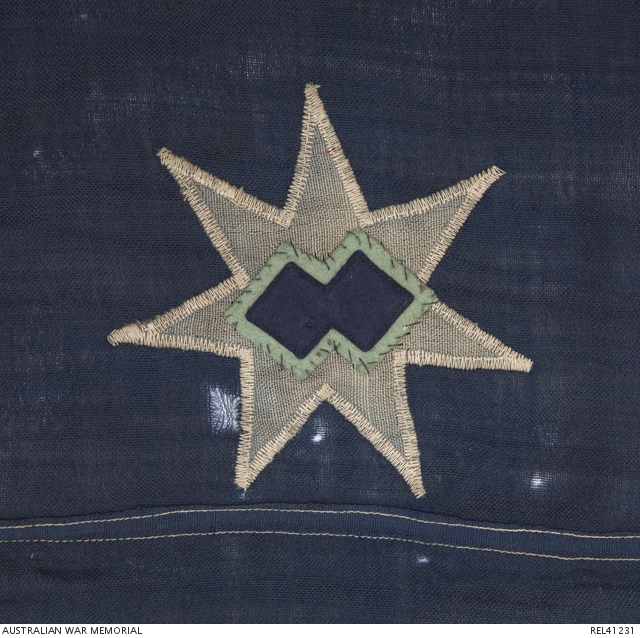 Australian blue wool bunting ensign with a colour patch for 2/4 Commando Squadron is sewn to the proper right star of the Southern Cross constellation. The cream linen hoist is marked in black ink 'ROLL of HONOUR' and bears the surnames and initials of the 15 men who were killed in action or died of wounds during the Tarakan campaign, together with the names of the 41 men who were wounded. The upper arm of the cross of St George on the Union Jack is marked in indelible pencil 'SADAU IS TARAKAN A.I.F. 2/4 COMMANDO SQN - MAY 1945'. The horizontal arms of the cross and the Federation Star, bear the signatures, or printed names, of some of the men in the Squadron, together with their states of origin.

In April 1945, while 2/4 Australian Commando Squadron was waiting on Morotai in the Netherlands East Indies, to embark for the island of Tarakan as part of the operation Oboe One, its commanding officer, Major Kevin Garvey raised the issue of the need to have an Australian flag to carry with them on the operation.

National flags were not routinely issued to most army units. However, Trooper Fred Lyons, from 9 Section C Troop of the squadron recalled that his brother in law, Sergeant Maurie Lawson, was also on Morotai, serving in the RAAF's No 11 Repair and Salvage Unit, and thought that he might be able to find a flag for the commandos.

Hearing this, the section leader, Lieutenant Dave Donald, gave Lyons the task of asking Sergeant Lawson if he could locate an appropriate flag. Lawson had no success but happened to notice this Australian flag hanging over the doorway of the RAAF officers' mess. Removing it in daylight was out of the question so he waited until late in the evening when the officers were inside the mess socialising and cut the flag free with a razor. The next morning Lawson took the flag to his brother in law.

The squadron sailed for Tarakan on 26 April tasked with leading the initial amphibious landing on Sadau Island, off Tarakan, to secure it for following artillery and engineers units. They landed on the island unopposed at 7.40 am and later raised their newly acquired Australian flag there. It was also flown subsequently on Tarakan.

On 3 May the squadron arrived on Tarakan itself and was immediately tasked with clearing Tarakan Hill of the Japanese. C Troop, under Captain Norman Nicolay, began the advance. At nightfall the squadron controlled three quarters of the high ground around the hill, including the crest. By 8 May, the squadron had gone on to clear Snag's Track as far as Haigh's but had suffered 7 killed and 19 wounded in their first four days on Tarakan. The squadron sustained a further 30 casualties before the end of the campaign, over 20 per cent of its strength.

At the end of the fighting, while the squadron was assigned to the northern sector of Tarakan near the Juata oilfields, some squadron members added their signatures to the flag. Corporal Arthur Bury also inscribed the names of the dead and wounded down the hoist.