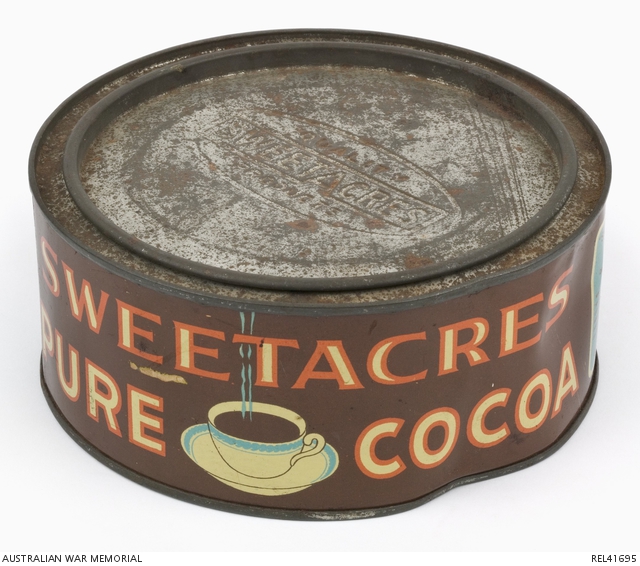 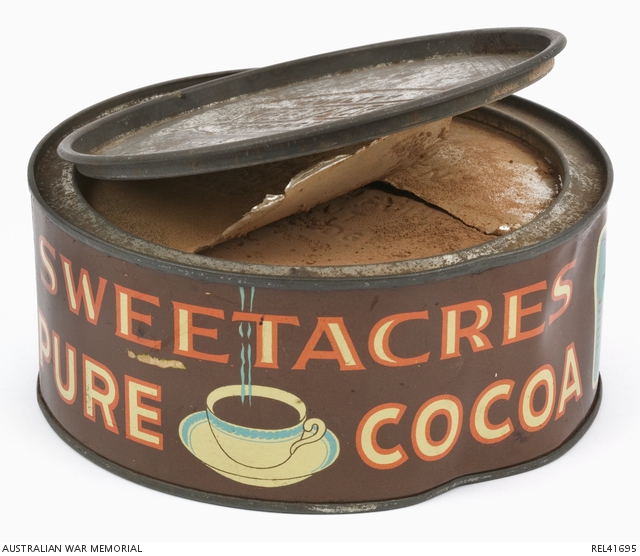 Round lidded tin with 'Quality Sweetacres Products' impressed into the lid. The words 'Tin Free Not Returnable' is impressed into the base. A printed label is gummed to the tin, featuring a graphic of a steaming cup and saucer accompanying the words 'Sweetacres Pure Cocoa'; this is repeated on the other side of the label. Two small blue coloured panels separate these, one featuring 'Directions for Use' and 'Net Contents 1 lb', while the other features a blurb on the product, and includes the details of the makers, the James Stedman Henderson Company of Rosebery, NSW.

Removal of the lid reveals the cocoa sealed under a thin protective sheet tin panel, impressed with the words 'To Open Pierce At Arrows Point and Cut Round The Edge.' This seal has been partially torn to reveal the intact and unused contents. The upper external tin surfaces display mild surface corrosion.

Tin of Australian-made cocoa sent in a Red Cross parcel and kept by VX13857 Lieutenant Archibald Larnach Walker, 2/1 Machine Gun Regiment during his incarceration as a prisoner of the Germans. Walker was born on 12 December 1913 at Brighton, Victoria. When he enlisted on 1 May 1940 at Caulfield, he was a single man working as a stock and station agent. He had also seen six years service with the militia - four years with 17/19 Light Horse Regiment from March 1934; then with 17 Machine Gun Regiment from July 1937 to February 1939, as a corporal and later sergeant.

Walker was appointed lieutenant upon his enlistment and was taken on strength of 2/1 Machine Gun Battalion on 24 May 1940. After training, he embarked aboard the transport Ulysses on 31 July, part of the Third Convoy leaving Australia. Rather than risk travel through the Mediterranean directly to Egypt now that Italy had entered the war as a German ally, the convoy was diverted to England via Cape Town.

Ulysses arrived in Liverpool on 11 October. Walker proceeded to the AIF Deport at Bulford. His battalion embarked for the Middle East on 16 November 1940 and, sailing around the Cape of Good Hope, arrived in Egypt on 30 December. Walker almost immediately contracted impetigo contagiosa (a skin condition) and was evacuated to 8 British General Hospital for a month - he was transferred to the Camp Training Regiment upon his discharge on 8 February 1941. His unit sailed for Greece on 29 March.

Walker was reported 'missing in action' a month later, on 30 April. A few months later, the Red Cross was informed he was a prisoner of the Germans; later, in mid February 1942, it was learned he was held at Oflag VIB (Dossel); on 12 September of that year he was moved to Oflag VIIB (Eichstatt, Bavaria). In April 1945 the camp was evacuated an the prisoners were marched to Stalag VII A at Moosburg.

When the prisoners evacuated the camp, many of the 'old timers', including Walker had accumulated many items, as they had been prisoners for many years. The German Camp Commandant, who had been a prisoner himself in the First World War made an arrangement whereby the prisoners packed up the possessions they could not take with them. The possessions were locked in a room and when the camp was liberated he let the Red Cross know about the items and gave them the key. Eighteen months after Walker returned to Australia his kit bag arrived with the items he had packed away, except for his diary, which had been removed. This tin of cocoa was one of the items that was returned in his kit bag.

He was recovered from Europe by advancing Allied forces and arrived in England on 10 May 1945, before embarking for Australia in early July, arriving in Sydney on 8 August. Instead on being discharged Walker elected to remain a serving member of the army on 3 September, returning to his original unit, 2/1 Machine Gun Battalion. He was made a temporary captain in May 1946 and was finally discharged in April 1947.

Sweetacres was an Australian manufacturer of sweets and chocolates, established in 1918 at a 12 acre site at Rosebery, NSW, by the James Stedman Henderson Company of Sydney. The company was acquired by Hoadley in 1968. Popular products also included Minties, Jaffas and Fantales. The company supported the war effort and made their products available to the Red Cross for inclusion in care packages sent overseas to prisoners of war.