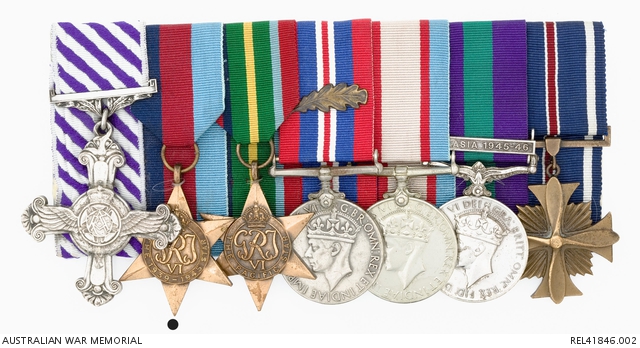 Medal group relating to the service of William Keith Bolitho, born Adelaide 11 February 1913. Bolitho was working as a bank clerk when he enlisted with the Royal Australian Air Force on 29 April 1940. After training he was commissioned as a Pilot Officer on 3 June 1941; promoted to Flying Officer on 3 December and to acting Flight Lieutenant on 1 April 1942. He was assigned to 20 Squadron piloting Catalina flying boats, arriving in Port Moresby on Christmas Day 1941 as 20 Squadron was being reinforced with extra aircraft. Bolitho later recalled: ‘On 22 January 1942 we made our first attack against Rabaul at night. ... The full strength was from 10 to 12 aircraft ...with an average of about three to four aircraft out every night. ... the crews used to fly alternate nights. There were no reserve crews at all.’ During March and April Bolitho stated, ‘in an intensive period of 33 days I flew a total of 280 hours. ... Trips would average from 19 to 23 hours.’ (Bolitho quotes taken from an interview conducted 16 April 1945 held at Australian Archives - see A9695/818)

By March 1942 Bolitho had been mentioned in despatches. Part of the citation for this award, covering the period 12 January to 1 March, reads: 'As captain of a Catalina flying boat, Flight Lieutenant Bolitho was regularly engaged on night bombing operations against the enemy and carried out reconnaissance tasks in a most efficient manner and has altogether completed 530 hours operational flying. On all occasions his attacks have been pressed home with vigour despite adverse weather conditions and enemy opposition.'

20 Squadron was then moved to, and operated from, Cairns to avoid the increasing attacks on Port Moresby. Raids were carried out against Japanese forces in Rabaul, Ambon, Sarong and Tulagi with frequent mine laying and patrolling missions.
In June 1943 Flying Officer Bolitho was recommended for a Distinguished Flying Cross for ‘Attacks on Rabaul and the Solomons area'. His citation reads: ‘Since the outbreak of war with Japan, Flying Officer Boiltho has completed 1,100 hours operational flying against the enemy, including 28 night bombing raids and 32 reconnaissance and convoy patrols, many of which were in enemy controlled waters. In January and February 1942 he made eight night raids on Rabaul
‘During a period of 31 days in April and May 1942, he flew on daylight reconnaissance of the Solomons area each day, completing 270 hours flying in the period. On the nights of 8 and 9 October 1942, he made two incendiary raids on Rabaul township involving 36 hours flying in 42 hours. Both raids entailed carrying a hull full of unjettisonable incendiary bombs through a fierce anti-aircraft barrage while caught in searchlights. The bombs were dropped by hand.
‘At all times this officer has displayed the utmost keenness to engage the enemy and his courage, coolness and determination have been an inspiration to all ranks.’

Bolitho was promoted to Squadron Leader in 1943. ‘From 2 November 1943 when the Yanks were bashing Rabaul we kept two Catalinas patrolling between Kirawina and Moresby and this was really the start of our air sea rescue work. We picked up two B25 crews in this period when we were operating from Oro Bay.’

On 8 June 1944 Boliotho was promoted to Wing Commander and was posted to 11 Squadron at Rathmines. This squadron had been mining Japanese ports and shipping lanes. Bolitho recalled that his squadron's mining operations meant that the Macassar Straits ‘were closed to the Japs for six months. They were opened on one occasion but the next day our boys closed them again.’ Operations moved north with the allied drive up the islands. In December 1944 all four Catalina squadrons combined to lay mines in Manila Harbour. ‘This proved to be the longest flight of the war. Six aircraft flew some 9,000 miles.’

In December 1944 both Wing Commander Bolitho and Squadron Leader Denis Russell Lawrence were awarded the United States Distinguished Flying Cross (rarely awarded to foreign nationals) for ‘heroism and extreme achievement’ for operations in conjunction with the United States Navy. They had co-operated with the tender USS Preston which had assisted in setting up a forward Catalina base at remote Cygnet Bay, in Western Australia, as a jumping off point for one of the longer raids in the Pacific War - mining the harbour at Balikpapan on two dates - 22 and 25 February 1945. A one-way trip to Balikpapan was some 945 miles.
‘With the object of overcoming radar interception, we flew at 10 to 30 feet above the sea until dark,’ related Bolitho. On the return trip, ‘we were jumped by two Jap floatplanes about 180 miles off the coast of Derby. One made about eight passes at me but without damaging us.’ According to Odgers in the Official History, the planes were Rufes and successfully hit the Catalina's wings, fuel tanks and oil tanks, but none of the bullets were incendiary. ‘The enemy pilots were evidently novices,’ Odgers notes, ‘and were content with diving attacks on the low-flying Catalina. A coordinated low-level attack would undoubtedly have brought about the destruction of the aircraft.’ On the second mission, headwinds were encountered on the return trip resulting in less than 100 gallons of fuel remaining in each aircraft.

In early March 1945 Bolitho moved to 3 Operational Training Unit (3 OTU), also based at Rathmines as Chief Instructor. The unit trained flying boat pilots and Bolitho's experience was viewed as a major acquisition for the unit. Bolitho was serving with the unit when the war ended, but he remained in the RAAF until his retirement as Group Captain. He served as Aide to the Minister for Air and Navy, the Honourable William McMahon during the Korean War and later commanded Fairbairn RAAF Base (Canberra) from August 1962 until November 1964.