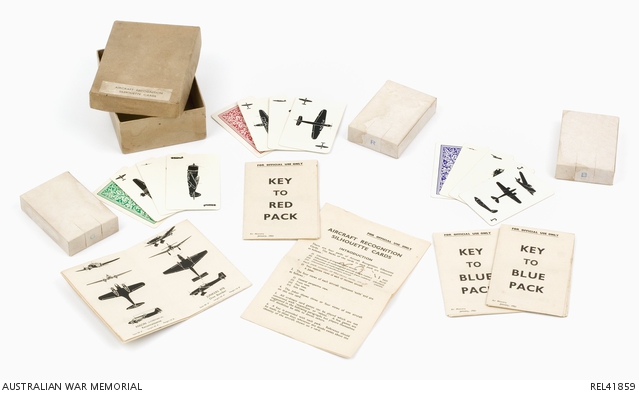 Rectangular card box, with lid, containing three sets of playing cards. A typed paper label has been pasted on the lid and reads 'Aircraft Recognition Silhouette cards'. The underside of the lower box is stamped in purple ink 'AID 77'. Contained within the box are three packs of playing cards, packed into card outers, the opening flaps stamped either R, G, or B; and a set of Playing Instructions. The initials stand for Red, Blue or Green (there is one set missing, identified as Orange), and the leaf design on the reverse of each card is coloured according to this classification. Each pack contains fifty three cards, consisting of four separate views of thirteen aircraft plus a joker (identified by a J on the card, and by being the only card containing multiple views of an aircraft). Each pack is accompanied by a folded printed key to the contents of the pack, featuring four-view silhouettes of a range of allied and enemy aircraft relevant to that pack. The key is dated Air Ministry January 1941 and each key, plus the instruction sheet, are labelled 'For Official Use Only'. The Instructions suggest a number of games that can be played with the cards, including Happy Families, Rummy, Clock Patience, Pelmanism, Snap and Banker.

No specific history known. Set of cards issued by the British Air Ministry in 1941 to servicemen and women to accustom them to the types of enemy and allied aircraft they were likely to encounter. As card playing was such a popular pastime, it was thought constant exposure to the silhouettes would inculcate the images in the players' minds.