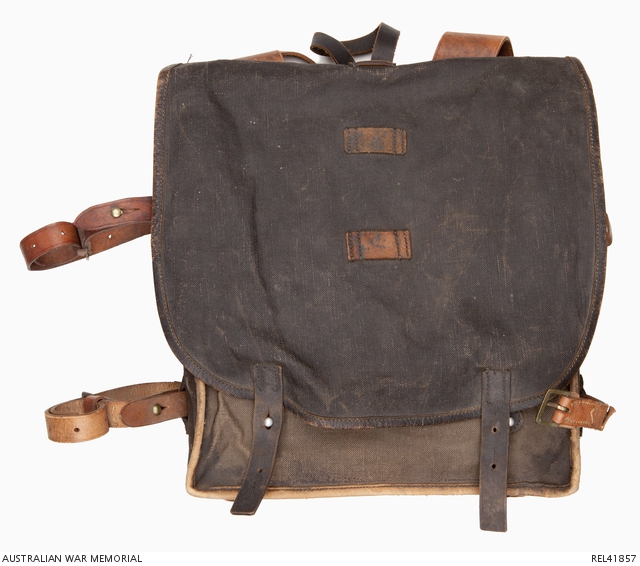 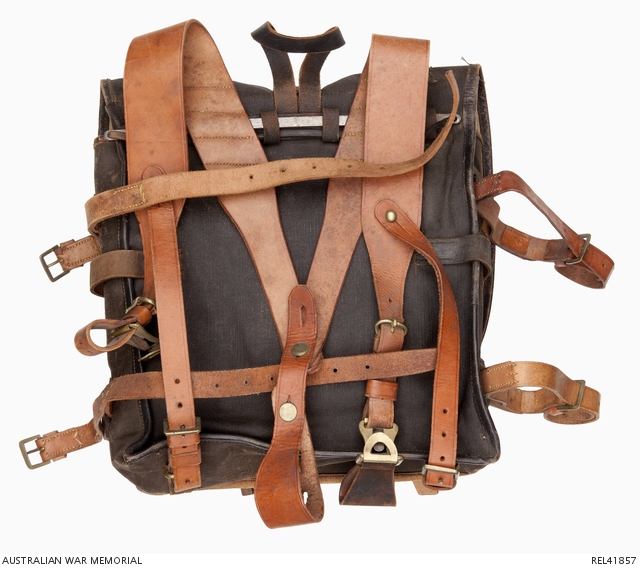 German Army other ranks ersatz (substitute) backpack (tornister) made from black painted canvas lined with unbleached linen. The flap lining is stamped in black 'A.E 1918'. It is secured to the body of the pack by means of a pair of leather straps on the outer flap and two white metal posts on the front of the pack. Two small brass 'D' rings are attached to leather tabs inside the base of the flap.

The back is reinforced near the upper edge by a white metal strip held in place by leather keepers and a leather thong. A leather suspension strap is attached to the centre. A pair of brown leather shoulder straps with brass fittings are attached to the back with the metal bar, which passed through slots in the straps. The straps meet together in a 'V' at the base of the packed where they are joined to an adjustable leather loop through which is threaded the wearer's waist belt. A stay strap extends from each shoulder strap and buckles to the base of the pack. The front end of each strap has an adjustable buckle fitting and spring fitted brass hook to carry an ammunition pouch. This example is designed to carry a single ammunition pouch only and the proper left strap bears an additional leather loop through which the belt would pass, to 'stay' the weight of the pack against the weight of the ammunition being carried on the proper right.

Each side of the pack carries two pairs of straps to secure a blanket roll. A further strap, placed between them extends across the width of the pack and closes with a brass buckle. Two leather keepers are sewn to the outer flap in place of the usual two pairs of keepers.

This German Army tornister was intended for use by second line or reserve troops. Second line troops, as opposed to front line troops, were lightly armed and would not normally be expected to take part in actual fighting. They included drivers of both horse drawn and mechanical transport, engineers and supply troops.

By the end of the war shortages of raw materials in Germany resulted in the use of ersatz (or substitute) materials, or the abandonment of certain features on military equipment. Tornisters originally had covers of calf hide, complete with hair, as a waterproofing device. During the war horse and dog hides were used as substitute materials. By the time this pack was made even these were in short supply and were omitted, as were some of the leather fittings.