Studio portraits of two brothers from the 50th Battalion AIF. On the left is 2938 Private (Pte) ... 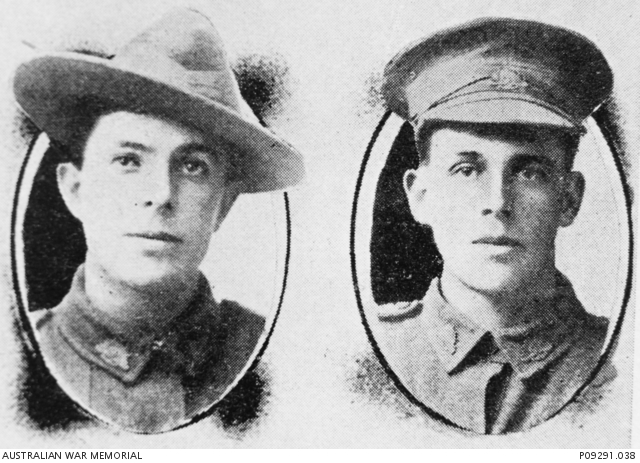 Studio portraits of two brothers from the 50th Battalion AIF. On the left is 2938 Private (Pte) Robert William West from Kanmanto, South Australia. A 26 year old barman prior to enlisting on 3 June 1915, he embarked for overseas with the 9th Reinforcements of the 10th Battalion from Adelaide on 21 September 1915 aboard HMAT Star of England. He joined the 10th Battalion at Gallipoli on 25 November 1915 and after the evacuation back to Egypt, transferred to the 50th Battalion on 26 February 1916. He went to France and Belgium with the 50th Battalion and served with them until he arrived back in Australia on 24 May 1919. On the right is 4906 Pte John Henry West from Glanville, South Australia. A 22 year old plumber prior to enlisting on 8 November 1915, he embarked for overseas with the 15th Reinforcements of 10th Battalion from Adelaide on 9 March 1916 aboard RMS Mongolia. While in Egypt, he transferred to the 50th Battalion on 28 April 1916 and embarked for France on 5 June 1916. On 16 August 1916 he suffered a gunshot wound to his left hand and was in hospital in France until 11 September 1916. In mid-June 1917 he injured his left ankle and broke his left fibula and was sent to hospital in England on 12 July 1917. After rejoining the 50th Battalion in France on 5 March 1918, he was killed in action at Villers-Bretonneux on 25 April 1918. Pte John West is buried in the Hangard Communal Cemetery Extension near Villers-Bretonneux, France.