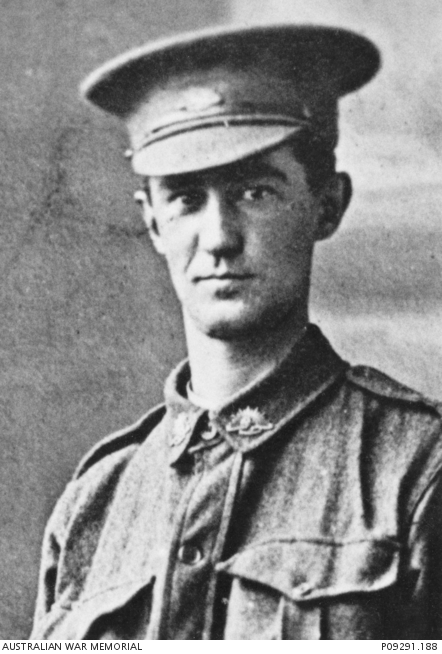 Studio portrait of 67 Private (Pte) Raymond Hadden Choat, 32nd Battalion. A clerk from Clarence Park, South Australia, prior to enlistment, he embarked with the 1st Reinforcements from Adelaide aboard HMAT Geelong on 18 November 1915 for Suez. His battalion relocated to the Western Front, France, in June 1916. Pte R H Choat was reported as missing in action on 20 July 1916 during the Battle of Fromelles and was subsequently confirmed to be killed in action on that date. He has no known grave and his name is recorded on the VC Corner Australian Cemetery and Memorial, Fromelles, France. He was aged 24 years. His youngest brother, 66 Pte Archibald Percy Choat, 32nd Battalion was killed in action at the Battle of Fromelles and is buried in the Rue Petillon Military Cemetery, France. He was aged 19 years. (See P09291. 189) A younger brother 68 Pte Wesley Paul Choat MM, 32nd Battalion, was taken a prisoner of war during the Battle of Fromelles and subsequently escaped through Holland arriving in England on 13 January 1918 before returning to Australia for discharge on 6 December 1918. (See P03236.156)