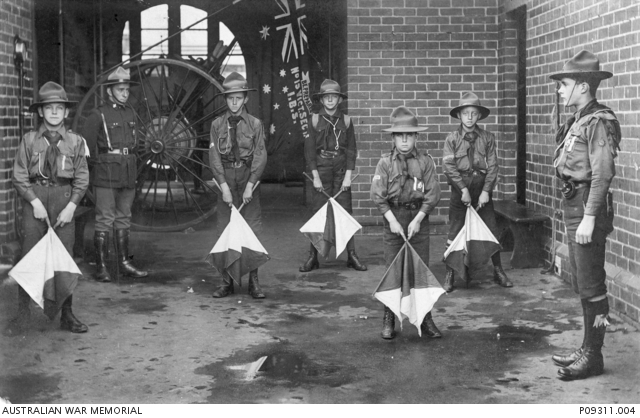 Member of the Metropolitan Fire Brigade and Scout Master Lewis Raikes Garrett (left) with boy scouts of No 15 Victorian Section St Kilda, International Boy Scouts, holding signal flags. A pumper (early fire device for pumping water in the event of a fire) and Boy Scout troop flag are in the background. Raikes had served in the Boer War as 39932 Trooper Garrett along with Troopers 4728 H R Cadden and 6778 Alfred Harris, all from Hawthorn, Victoria, serving together in irregular unit Thorneycroft's Mounted Infantry. The men had attempted unsuccessfully to enlist in the contingents leaving Victoria so had made their own way to South Africa and enlisted with Thorneycroft's Mounted Infantry; they returned in 1901. In 1912 Garrett became a District Scout Master. The founder of Scouting, Lord Robert Baden-Powell was born in 1857 in England. He won a scholarship into the British Army, where he was sent to India and served for many years. He tried out his ideas of training soldiers in "Scouting", teaching them how to develop experience in stalking and fending for themselves and to be observant of all signs that would give them an advantage as soldiers. As a soldier, Baden-Powell rose to public prominence during the war against the Boers in South Africa. He became famous in England for his leadership of the defending force in the siege of the town of Mafeking in 1899 having successfully defended the town against the Boers. In 1908 he wrote a book Scouting for Boys which formed the basis or training and the development of the Boy Scout movement. The visits made to Australia by Baden-Powell in 1912 and in later years (1931-34) encouraged the extension of the Scouting Movement in Australia.