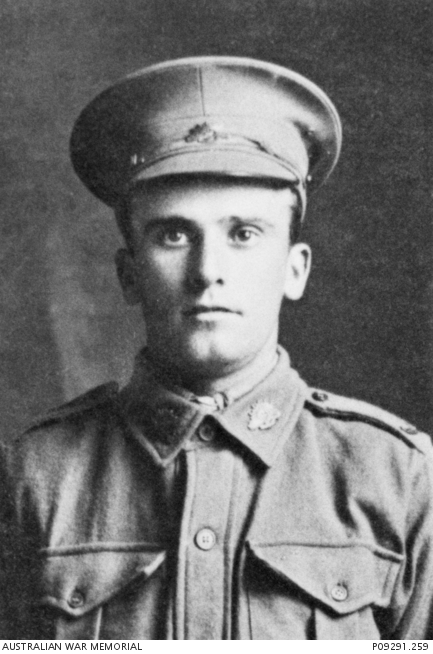 Studio portrait of 4399 Private (Pte) William Heyer, 32nd Battalion. A gardener from Crafers, South Australia, prior to enlistment, he embarked with the 11th Reinforcements from Adelaide on 7 November 1916 aboard HMAT Afric for Plymouth, England. After training in England he joined his unit on the Western Front, France, in mid-April 1917. Pte Heyer was wounded in action on near Zonnbeke, Belgium, on 13 October 1917 and was evacuated to England for treatment and recuperation. While in England he also suffered from illness and consequently did not rejoin his battalion until late July 1918. Pte Heyer was killed in action near Nauroy, France, on 29 September 1918 and is buried in the Bellicourt British Cemetery, France. He was aged 25 years. His younger brother, 967 Pte Henry Heyer, 43rd Battalion, died of wounds received in action near Messines, Belgium, on 1 July 1917.