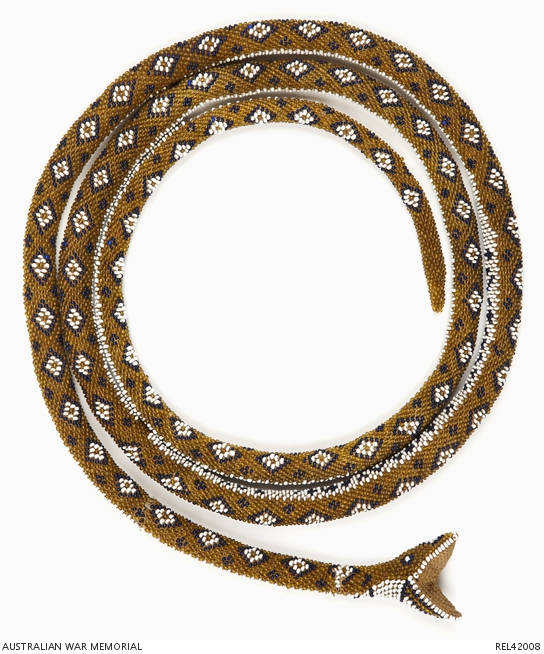 'TURKISH - PRISONER 1917' is worked on the snake's white belly in black beads, but the text is back to front. There is a yellow cross and a small diamond shape before the text, small diamonds between each word and a larger diamond after the text. There is another yellow cross on the belly, almost half way between the head and the text.

This snake was collected by 2588 Trooper Michael Benedict Curran who served with the 8th Light Horse Regiment (8 LHR) in Egypt and Palestine. Michael Curran was born at Stawell, Victoria and was working as a contractor when he enlisted in the AIF on 25 February 1916. He was 44 years and 11 months old at the time - the maximum age for enlistment was 45 years old.

Curran was married and he and his wife Annie had at least six children, Margaret, James, Robert, Lucy, Mary and John. James and Robert also served in the AIF during the war.

Curran was allocated to the 18th reinforcements of 8 LHR. He embarked from Melbourne aboard RMS Mongolia on 11 July 1916.

After arrival in Egypt he trained with the 3rd Light Horse Training Regiment from August 1916 to February 1917, before joining 8 LHR. On 2 May Curran was admitted sick to hospital with gastritis. Two days later he was wounded in the right hip when the hospital was bombed.

It took Curran some time to recover from his wound and he did not return to the front. He went before the medical board and was classified B2, or was unfit for active service abroad. He was again admitted to hospital in September due to his wound. Curran embarked for Australia aboard the hospital ship Wiltshire on 12 November 1917. He died on 8 June 1956.